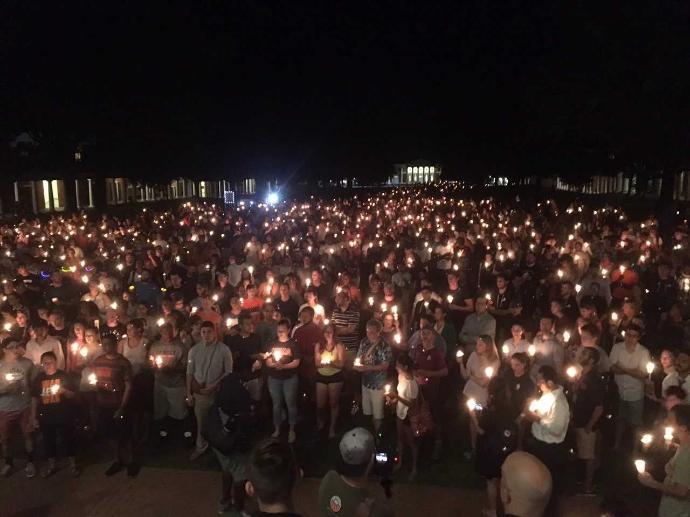 CHARLOTTESVILLE, Va. -- Hundreds of people gathered on the University of Virginia campus for a peaceful candlelight vigil against hate and violence days after Charlottesville erupted in chaos during a white nationalist rally.

Marchers Wednesday covered the same ground that hundreds of torch-carrying white nationalists had taken Friday, when several fights broke out. That was followed Saturday by clashes between rally attendees and those protesting them in the city's streets, which resulted in the death of a woman when an alleged white nationalist appeared to delibertely plow into counter-protesters with his car.

The participants spread word through text message, phone calls, and private messages on Facebook and avoided using traditional social media to gather people, CBS News' Rebecca Kaplan reports.  There was no sign of Unite the Right, the white nationalist organization behind this weekend's violent rallies.

"What happened on Friday night was a tragedy and we're here to take back the lawn for this student generation, all the previous, all the future generations of students who walked the Lawn," March attendee Jerry Connor told CBS Charlottesville affiliate WCAV-TV. "The Lawn stands for liberty, equality, justice and freedom."

Along the way participants sang "We Shall Overcome," "This Little Light of Mine," and "The Good Old Song," a UVA song set to the tune of "Auld Lang Syne." At the Rotunda, a speaker read the poem "Still I Rise" by Maya Angelou and led the crowd in another round of "We Shall Overcome."

People left their candles by the Thomas Jefferson statue outside the Rotunda as they left. .

The Black Student Union is planning a similar march for Sunday evening.

A memorial had been held earlier in the day for 32-year-old Heather Heyer, who was mowed down by a car as she protested the rally. Two Virginia state troopers also died in the crash of their helicopter, which was monitoring the rally.

Heyer's mother, Susan Bro, said at the memorial that Heyer's death "struck a chord ... because we know that what she did was achievable."

"They tried to kill my child to shut her up. Well, guess what? You just magnified her," Bro said.

Thousands of people rallying against white supremacists have marched through the streets of downtown Philadelphia.

Wednesday's event was called the Philly is Charlottesville March and Rally. About 2,000 protesters marched from the Congregation Rodeph Shalom Synagogue and down Broad Street, CBS Philadelphia reports.

Organizers say they have to "boldly rebuke all forms of bigotry."