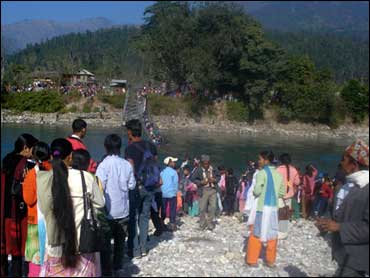 A steel footbridge collapsed under the weight of hundreds of people in remote western Nepal on Tuesday, sending scores plunging 100 feet into the icy Himalayan waters below. At least 15 people were killed and more than 100 missing and feared dead, officials said.

Troops were being rushed to the area to assist with search and rescue operations, but with efforts halted by nightfall, hopes of finding more survivors in the treacherous mountain river were slim, said Anil Pandey, the top government official in the area.

Authorities believe some 500 people traveling to a village fair were crossing the Bheri River on the bridge when its support cables snapped under the weight, said Pandey.

"Some of them managed to climb to safety, some fell on the banks but the ones who plunged in the river are the ones who are still missing," he said.

Crowds gathered on both sides of the river, trying to save the victims and treating the wounded. Some who had fallen used the fallen bridge's cables to haul themselves up.

By nightfall, rescuers had recovered 15 bodies, while 32 people who were seriously injured were flown to hospitals in more developed parts of the country, said Dipendra Chetri, a police official who helped rescue people in Chunchu, the village where the bridge collapsed.

Dozens more with light injuries were treated at the scene and allowed to return home.

Pandey refused to give a number for the missing, saying the scene was still chaotic and that nearby villages had not sent missing person reports yet.

"It is hard to say how many people are missing but the best estimate I can say is more than 100 people could be missing," said Purushottam Khatri, another police officer.

Complicating the accounting was the remoteness of the accident scene.

Chunchu is located about 310 miles west of Katmandu in a rural part of this Himalayan country where there are few paved roads. The most common ways of getting from place to place were on foot or in a bullock cart.

Much of the impoverished region's already-poor infrastructure was devastated by a decade-long communist uprising that ended last year. The Maoist rebels, who controlled much of the area, frequently blew up bridges and roads to impede government troop movements.

More than 13,000 people were killed in the fighting.

Pandey said the 400-foot long bridge was built this year after a peace deal was clinched, but that it was not designed to hold the weight of so many people crossing at once.

The people had been on their way to fair held every month after the full moon. The fair attracts thousands of people from surrounding villages.

Authorities feared there could be many more casualties because the river has strong currents and is difficult to swim, adding that victims were likely to be the weakest swimmers - the elderly and children.

Authorities said hundreds of police and soldiers were being rushed to the area, but there was no word on when they would arrive.