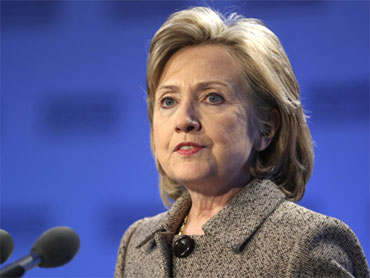 Greg Kaufmann is a contributor to The Nation.


In the ornate Benjamin Franklin State Dining Room at the US State Department-before a standing-room-only crowd that Secretary of State Hillary Clinton described as "one of the biggest we've had here"-Clinton recognized Laura Germino, the antislavery campaign coordinator for the Coalition of Immokalee Workers (CIW), as an "anti-Trafficking Hero." In the ten years that the award has been given to individuals who have shown an extraordinary commitment and leadership in the fight against slavery, Germino is the first US-based recipient.

The occasion was the release of the State Department's 10th Annual Trafficking in Persons (TIP) Report. Clinton said the report provides "in-depth assessments and recommendations for 177 countries" on how to reach the goal of "abolishing the illicit trade in human beings." In another first, the report includes an assessment of trafficking in the United States.

Clinton described the significance of including the United States in the TIP report.

"This report sends a clear message to all of our countrymen and women: human trafficking is not someone else's problem," she said. "Involuntary servitude is not something we can ignore or hope doesn't exist in our own community."

Ambassador-at-Large Luis CdeBaca, a longtime federal prosecutor and now director of the Office to Monitor and Combat Trafficking, agreed. "In our first Trafficking in Persons Report, we cited the US only as a destination or transit country, oblivious to the reality that we, too, are a source country for people held in servitude," he said. "We have an involuntary servitude problem now just as we always have throughout history."

Which is exactly why Germino was honored along with eight other activists from Brazil, Burundi, Hungary, India, Jordan, Mauritania, Mongolia and Uzbekistan. Germino and her colleagues at CIW have helped the US Department of Justice prosecute seven slavery operations in Florida over the last fifteen years, resulting in the liberation of over 1,000 farmworkers, as the plaque presented to Germino attests.

CdeBaca introduced Germino who spoke on behalf of all of the TIP Heroes.
"In the early 1990s, Laura began to not just give a voice to escaped slaves, but traveled to Washington on her own dime to hold the federal government accountable to investigate and prosecute these cases. And when I say 'federal government,' I mean me," he laughed. "There have been many cases exposing servitude for both sex and labor in Florida. And the Coalition of the Immokalee Workers and Laura Germino have always been there. They've been important partners and, more importantly, an independent and pressing voice as they uncover slavery rings, tap the power of the workers, and hold companies and governments accountable."

Holding companies accountable was a theme not only voiced by CdeBaca but also Clinton-and not just the primary perpetrators of slavery but the corporations that use those companies in their supply chains. That concept has been the driving force behind CIW's Campaign for Fair Food, demanding that companies take responsibility for the conditions of their supply chain in order to alleviate the poverty and powerlessness at the root of the agriculture industry. It is the central argument CIW has waged in successfully obtaining pay raises and enforceable code of conduct agreements from the four largest fast food companies in the world, the two largest food service companies, and the largest organic grocer. (Watch out Publix and other grocers, you're next.)

So when the Secretary spoke these words-"It is everyone's responsibility. Businesses that knowingly profit or exhibit reckless disregard about their supply chains…all of us have to speak out and act forcefully"-you could almost feel the chills traveling up the spines of the hundreds of activists from all over the world who packed the room. Some broke into grins, cameras flashed.

"Now you have Secretary of State Clinton saying we need to have corporate responsibility in the supply chain," Germino later told me. "That's huge. We have to get to the point of prevention where slavery doesn't happen anymore, and right now the most effective way to get that done is through market consequences. Any corporate buyer of fruits and vegetables who still is not willing to take ownership of this issue has no excuses left."

When Germino took the stage she thanked the other award recipients for their "unflagging courage and grace and progress made under extremely difficult and dangerous circumstances in which you work overseas." She pledged that together they would continue "our collective fight to wipe slavery off the face of this earth."

She delivered a hopeful message in citing the progress that has already been made.

"Twenty years ago, there was no State Department TIP Report. There was no Justice Department Anti-Trafficking Unit. There was no Trafficking Victims Protection Act, no freedom network of NGOs," she said. "There was no admission yet by this great nation that the unbroken threat of slavery that has so tragically woven through our history, taking on different patterns, but always weaving the horrendous depravation of liberty-that it was a constant…. So when we struggle with our frustration at the pace of change, we remember those days and realize how far things have come in such a short time."

With a nod to the Secretary, Germino offered that "it takes a village to raise a child; it takes a whole community to fight slavery."

Germino recognized her colleagues at CIW-and that wasn't just lip service. In many years of working for and covering NGOs, I've never seen one that operates so efficiently as a collective-in the decisions they make, the actions they take, the wages they earn, and the shared credit for victories. CIW simply doesn't distinguish its parts from the whole.

I think that's a key reason this community-based organization in tiny Immokalee, Florida is able to have such a powerful national impact. It's why parked outside of the State Department during the ceremony-and on the National Mall today and tomorrow-was CIW's Modern Day Slavery Museum. And it's why one of CIW's many heroes found herself standing in the Benjamin Franklin State Dining Room, hearing the central tenets of CIW's fight against slavery echoed by the US Secretary of State.

By Greg Kaufmann:
Reprinted with permission from The Nation

Hail to the skirt chaser-in-chief?