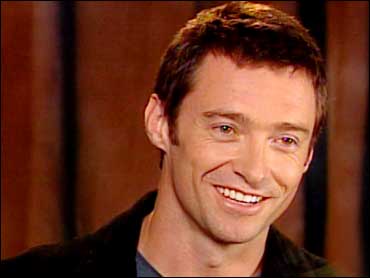 On Sunday night, Broadway hands out its highest honors at the 59th Annual Tony Awards. And, for the third year in a row, the gala will be hosted by Hugh Jackman.

When you think of Jackman, the first thing that comes to mind is "movie star," notes People magazine senior editor and The Early Show entertainment contributor Jess Cagle, but Jackman actually got his start on the stage, in his native Australia.

He returns to the stage of Radio City Music Hall for Sunday's Tonys.

"The room is like a Ferrari," Jackman marvels. "It's like the best audience you can ever imagine. People that are watching it love it, and the show, it's not an awards show. We're not trying to jazz it up. It's genuinely a show. You get to see at the Tony Awards the performances, the best of Broadway performed live, so I've got aces up my sleeve all over the place.

"I'll admit to being a little nervous this year, because sitting in the front few rows is going to be Billy Crystal, so that's like boxing in front of Muhammad Ali. It's a little daunting."

Jackman is selling himself short, observes Cagle. Jackman also knows a thing or two about putting on a good show. Last year, he danced with the Rockettes, rode a camel, and pulled Sarah Jessica Parker on stage for an impromptu dance.

What's in store this year?

"Well," Jackman says, "in my limited experience, I've been around Broadway four or five years now, and from talking to people, this is one of those very strong years. …Also, Aretha Franklin's performing, which is incredible. Just to be on the same stage with her, and I keep trying to talk her into doing a duet, which you never know, may happen. I was singing around her hotel room. …I don't know if that was good idea. …She threw something at me, but I think that was a good thing."

Jackman is no stranger to musical theater. His breakout role was in the critically acclaimed London production of "Oklahoma." Last year, he walked off with his own Tony award, for a tour de force performance in "The Boy From Oz."

"Why do stars like you, and so many this year, really enjoy getting back to the theater?" Cagle asked.

"Most actors started in the theater," answered Jackman. "It is also the most immediate form of communication with the audience. You really get that sense of entertaining, of telling a story, of getting the feedback. I wouldn't trade in either for the other. If you ask me which I prefer, it's a very tough question, but if I listed my top 10 moments, most of them would have been on stage."

Asked about evolving into both an action star and a musical comedy star, which doesn't happen often, Jackman said, "I would like to say that I planned it that way, but the only thing I had in mind -- my goal as an actor when I left drama school was to open as many doors as possible, because I thought the doors are slammed closed really fast. If I can keep as many open as I can at the same time, it would be terrific.

"Now, did I think I was going to be on Broadway playing Peter Allen, while at the same time releasing 'Van Helsing,' and then getting ready to do 'X-Men 3.' No. It's kind of beyond my wildest dreams. A few people came to see 'The Boy From Oz' who were expecting Wolverine, and I think were quite angry at me."

When Cagle kidded that, "They were in shock," Jackman quipped: "They're in therapy."

What's next for Jackman?

"I did a movie called 'The Fountain,' which Darren Aronofsky wrote and directed, which I'm very, very proud of, very excited about. That will come out at the end of the year.

"It's nothing you've seen before. It's about life and death. The meaning of life, love. It's a love story. It is the most challenging role I've ever had…but then, 'X-Men 3' is going to happen: In August, we start filming. So I'll be jacking up and putting on the mutton chops."

"And the razor claws," Cagle remarked.

"They're always there," Jackman chuckled, "so don't make me angry."

"X-Men 3" is expected to be in theaters next summer.