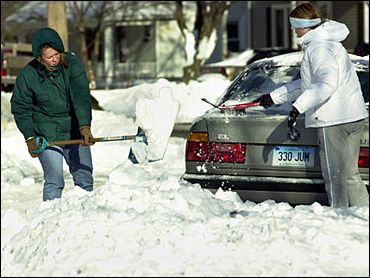 With school canceled and the skies sunny, children around the Northeast frolicked in the snow Monday as the grown-ups labored to dig out their entombed cars, clear sidewalks and slog their way to work.

Arcadio Francisco, 32, said he was unable to get to his job as an electrician because the street where he parked his car was still under 2 feet of snow. But kids were enjoying the pileup.

"They're standing on top of the cars and jumping into the snow," Francisco said.

The storm that blustered up the Eastern Seaboard over the weekend was moving out into the Atlantic on Monday. Rain and higher temperatures forecast for later this week are expected to the speed the melting, and officials warned of flooding and roof collapses.

On Monday, two groups of missing campers were found safe in Maine's western mountains, parts of which had more than 2½ feet inches of snow. A group of 10 high school students and two adults were spotted from the air by a pilot, and three college students were found holed up in their car.

The deepest snow, 47 inches, was recorded in Pinkham Notch at Mount Washington in New Hampshire. Some other parts of New England were blanketed by nearly 3 feet, while eastern New York had up to 2 feet and Cliffside Park, N.J., had almost as much, 23 inches.

The cleanup proved arduous — and costly. In Connecticut, where up to 20 inches of snow fell, the cleanup cost about $3.5 million to pay for plowing, salt and sand.

Even as skies cleared and snowplows did their work, delays continued for some travelers by air and rail.

Lines remained long at Boston's Logan Airport, where some arrivals were delayed more than two hours. Amtrak also warned that trains would be delayed and crowded Monday throughout the Boston-Washington corridor.

During the weekend, hundreds of flights had to be canceled at Logan, Philadelphia, Kennedy, La Guardia and Newark airports.

The storm was blamed for at least 13 deaths in the Northeast, most of them in traffic accidents. New Jersey and Massachusetts each reported one person dead after collapsing while shoveling snow. A Massachusetts railway worker was killed when a train collided with his snow blower, and a Rhode Island man died in a sledding accident.