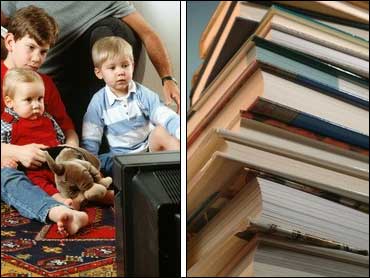 The reading of books is on the decline in America, despite Harry Potter and the best efforts of Oprah Winfrey.

A report released Thursday by the National Endowment for the Arts says the number of non-reading adults increased by more than 17 million between 1992 and 2002.

Only 47 percent of American adults read "literature" (poems, plays, narrative fiction) in 2002, a drop of 7 points from a decade earlier. Those reading any book at all in 2002 fell to 57 percent, down from 61 percent.

NEA chairman Dana Gioia, himself a poet, called the findings shocking and a reason for grave concern.

"We have a lot of functionally literate people who are no longer engaged readers," Gioia said in an interview with The Associated Press. "This isn't a case of 'Johnny Can't Read,' but 'Johnny Won't Read.'"

The likely culprits, according to the report: television, movies and the Internet.

"I think what we're seeing is an enormous cultural shift from print media to electronic media, and the unintended consequences of that shift," Gioia said.

The decline came despite the creation of Oprah's book club in 1996 and the Harry Potter craze that began in the late 1990s among kids and adults alike. Reading fell even as Barnes & Noble boasted that its superstore empire was expanding the book market.

"Whenever I hear about something like this, I think of it as a call to arms," said Mitchell Kaplan, president of the American Booksellers Association. "As booksellers, we need to look into what kinds of partnerships we can get into to encourage literacy and the immediacy of the literary experience."

In May, the nonprofit Book Industry Study Group reported that the number of books purchased in the United States in 2003 fell by 23 million from the year before to 2.22 billion.

The NEA study, titled "Reading at Risk," was based on a Census Bureau survey of more than 17,000 adults.

The drop in reading was widespread: among men and women, young and old, black and white, college graduates and high school dropouts. The numbers were especially poor among adult men, of whom only 38 percent read literature, and Hispanics overall, for whom the percentage was 26.5.

The decline was especially great among the youngest people surveyed, ages 18 to 24. Only 43 percent had read any literature in 2002, down from 53 percent in 1992.

Gioia said the electronic media that are contributing to the problem do offer possible remedies. He praised Winfrey's use of television to promote literacy and said he wished for a "thousand variants" of the idea.

"There's a communal aspect to reading that has collapsed and we need to find ways to restore it," Gioia said.

The title "Reading at Risk" is modeled on "A Nation at Risk," a 1983 government study that warned of a "rising tide of mediocrity in elementary and secondary schools" and led to numerous reforms. But Gioia avoided specific proposals in the NEA report.

"I don't believe the NEA should tell the culture what to do," he said. "The reason we are bringing this study out is that we consider it a crisis situation that requires a national conversation."