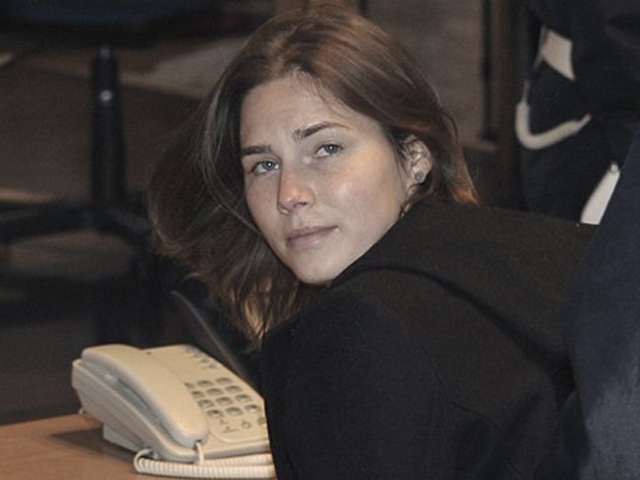 A hearing for Amanda Knox in Italy Saturday represented what CBS News correspondent Allen Pizzey called the "start of her defense team's best chance to take apart the evidence that convicted her."

Seattle native Knox, now 23, and ex-boyfriend Raffaele Sollecito were convicted last year of murder and sexual assault in the 2007 death of Briton Meredith Kercher, with whom Knox shared a cottage in Perugia while attending college. Knox and Sollecito were sentenced to 26 and 25 years in prison, respectively.

Knox and Sollecito have always denied wrongdoing, insisting they weren't at the cottage the night Kercher was killed but were at Sollecito's house.

Pizzey says leaked documents indicate that two independent forensic experts will say traces of Knox's DNA on a 12-inch kitchen knife, and Sollecito's on a bra clasp found at the murder scene, were too small and too contaminated to be admissible as evidence. The bra clasp belonged to Kercher, who was found with her throat cut.

The expert re-examinations were part of an independent review of evidence granted by an appeal court judge earlier this year.

Testimony by a homeless, self-confessed heroin user that he saw Knox and Sollecito lingering near the crime scene the night of the killing is being disputed by defense witnesses - and, says Pizzey, "seemed to contradict his own testimony. The vagrant based his timing on buses he said were passing. But bus company witnesses said there were none running that night because it was a public holiday in Italy."

Knox is also said to be upset, and her family disgusted, at the portrayal of the crime in a made-for-TV movie that's just been released. The family tried unsuccessfully to have the movie blocked.

Another hearing is set for May 21, when the evidence from the independent forensic experts will be presented.

And if those experts do portray the evidence against Knox they way they reportedly will, it would be "huge" for Knox, criminologist Casey Jordan told co-anchor Rebecca Jarvis on "The Early Show on Saturday Morning."

"Her family has been fighting so hard for two years, been supportive," Jordan said. "And what their greatest enemy has been is a lot of misinformation in the press, this made for TV ... movie. Everyone just assumes she's guilty, and hasn't really stopped to look at the evidence which, in fact, is very weak. This independent panel of experts is (reportedly) coming back with a lot of findings that are contrary to everything that should have convicted her in the first place."

Jordan says Knox's parents apparently did her more harm than good by repeatedly and strongly backing their daughter in public. So far though, they've stayed mum regarding the independent experts.

"I think they're being very, very strategic and clever," Jordan said, "because, the Italian judicial system has smacked them, they've smacked Amanda, for libel and slander. Every time they've criticized the judicial system, they seem to be the subject of retaliation. Now that they're stepping back, keeping quiet, allowing the system to save face, perhaps admit (the system) did some things wrong, perhaps Amanda was over-prosecuted by this zealous prosecutor, who had this crazy theory of the Satanic ritual, which is not supported by the forensic evidence. Step back, let the system work. Save face. Don't criticize it. And perhaps Amanda might eventually be set free."

Jordan says she was "literally horrified" when she heard the bra clasp on which DNA was supposedly found had rusted. "How could it have rusted?" she asked. "You always have to dry DNA, very specific techniques, store it properly, chain of custody. It apparently was stored in a jar of liquid. ... That is not proper storage of DNA. Whatever DNA they originally claimed was on that clasp would be completely gone and degenerated if it was stored in liquid. The bottom line is, you've got something which has been destroyed by improper handling and it raises questions: How much else of the other evidence, of the other DNA, was improperly handled, improperly stored or maybe just fabricated to start with?"

What will it take for Knox to win this appeal?

"A mixture of patience, allowing the system to save face, and grind away, one day a week for the next few months, until they get to the point where findings of the independent investigators, which show that so much of that evidence was completely inconclusive, wrong, there's not enough of it to retest. Let the system work. Let it save face, and they may step back and Amanda and Raffaele may walk free in May."

Italy's justice system, Jordan explained, is "a little bit different. In the United States, her verdict would be overturned, she'd be going back for another trial. In the Italian system, if the judge, and I believe a jury of six people, agree that the evidence was inconclusive and that she was wrongfully convicted, her verdict will be overturned and she will be free."