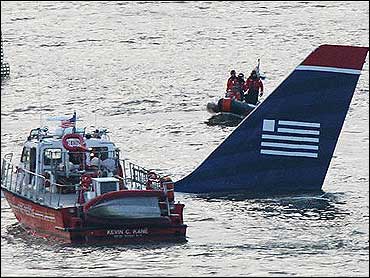 Thanksgiving. I met and I interviewed a number of the passengers from the U.S. Airways flight that landed in the Hudson River Thursday. They knew there was trouble moments after takeoff - the thud, the smoke from one of the engines, the quiet on board until the pilot said brace for an emergency landing.

Eric Stephenson told me he grabbed a pen and business card and scribbled "I love you" on the back, then shoved it in his pocket. '"hen they find my body, they'll find the note." he said.

Bill Elkind said it reminded him of being in a car accident - the violence of the plane's collision with the river, and then the scramble to the doors. Order and chaos at the same.

There on the deck of a New York Waterways craft was Willie Rivera. People were crying, they were cold, he said. Willie himself still seemed in shock.

Andreas Sappock loaded a Circle Line boat with firemen and cops. Watching them work reminded him of 9/11, he told me. But with a happy ending.