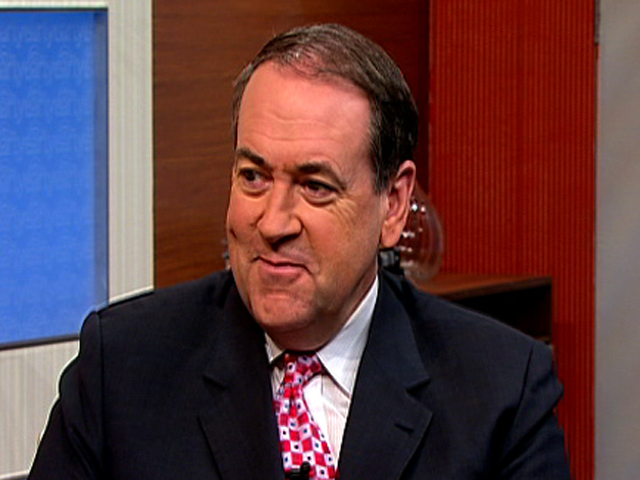 What's next for Mike Huckabee? Will the former Republican presidential candidate make another bid for the White House in 2012?

Since his run in 2008, Huckabee has become a fixture on the national political stage, with his own cable TV news show, his own radio show, speaking engagements across the globe and a new book, "A Simple Government - 12 Things We Really Need from Washington," that hits bookstores today.

But will Huckabee make another push for the presidency?

On "The Early Show" Tuesday, the former Arkansas governor said he "very well may" run in 2010.

Huckabee said he wants to find out if the book resonates with readers.

Huckabee also spoke on the broadcast about the ongoing showdown between teacher and other public employee unions and Wisconsin Gov. Scott Walker, saying Walker is taking on a serious issue that's applicable to the entire country.

"You can't spend money you don't have," he said. "You can't borrow money that you can't afford to pay back. Every citizen knows that. Every small business owner knows that. It's like government is the last entity on Earth to get that message."

Wragge said, "In Wisconsin, specifically, it seems to look like this governor is trying to basically break unions and that other states may then follow suit. Is this -- should unions be on alert all around the country?"

Huckabee said unions have to get "realistic."

"They can't expect to pay $1 in and get $57 from the state as a pension match. Nobody else gets that. And that's what's unrealistic. So, if the unions don't come to some type of reality, then they're going to get busted, and if not by the governor, they'll get busted by reality in terms of a budget that can't manage that sort of cost."

And what about Congress' budget battle? Wragge noted there are just four working days left for Congress to come up with something, or there could be a government shutdown.

He said, "Didn't work well for the Republicans back in '95, '96. Could this adversely affect them down the line?"

"It's a different environment this time," Huckabee asserted. "First of all, a lot of the things that were shut down are now automated, like Social Security checks and veterans' checks. So it's not going to be as draconian if it does happen. But there has to be a reckoning with reality, and a message, I hope, that people will really start thinking about. And, again, it is the centerpiece what have I said is a simple government -- simple principles applied, and that means if you are in a hole, the first thing to do is quit digging. And we've got a government that just continues to dig, even though they're in an incredible debt hole. And the fact is, we are, for the first time in our history, actually spending more money than the entire gross domestic product of the full country. That's unheard of. We've never been in that position before. We are now."

But is the shutdown going to happen -- or is it just more rhetoric?

"It could happen. And maybe it has to," Huckabee said. "Sometime, either now or later, the government will shut down, either from bankruptcy in the future or from a targeted effort to try get someone's attention that we're overspending and not managing at all."

On the book, Huckabee added, "I've written a lot of things. It this could be fiction, in fact, a simple government, but this book is written in such a simple way that even members of Congress can understand it!"