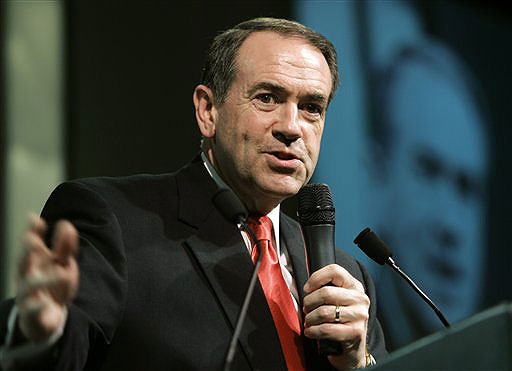 Former GOP presidential contender and potential 2012 candidate Mike Huckabee said Wednesday that he does not support a repeal of the 14th Amendment -- a part of the Constitution other Republican leaders have called into question recently because it guarantees citizenship for children born in the United States, regardless of their parents' immigration status.

Huckabee said in an interview Wednesday that he does not support a repeal, NPR reports.

While the former Arkansas governor said, "I'm not for an amnesty program," he added, "You do not punish a child for something the parent did."

The 14th Amendment has come under scrutiny from Republicans as the nation takes a closer look at its immigration problems. Sen. Lindsey Graham (R-S.C.), once a backer of comprehensive immigration reform, said last month that "birthright citizenship is a mistake" and that he may introduce a constitutional amendment to change the rules. Senate Republican Leader Mitch McConnell, Sen. Jon Kyl (R-Ariz.) and other Republicans have advocated for congressional hearings on the issue of birthright citizenship.

Huckabee told NPR that the nation is better off giving all children opportunities to succeed as citizens, even if they were not born in the United States.

An estimated 340,000 of the 4.3 million babies born in the United States in 2008, or about 8 percent, were the offspring of undocumented immigrants, the study shows. Pew's figures come from the U.S. Census Bureau's March 2009 Current Population Survey.