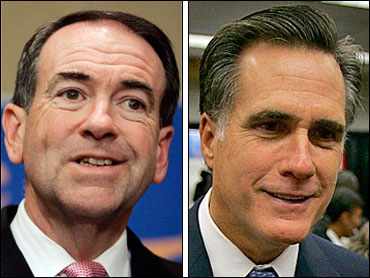 Republican presidential hopeful Mike Huckabee says he has apologized to rival Mitt Romney for questioning whether Mormons believe Jesus and the devil are brothers.

On CNN, Huckabee said he told Romney "face to face" after today's debate in Iowa that he was sorry for the quote from an article to be published in Sunday's New York Times Magazine.

Huckabee told CNN that he had asked if Mormons believe Jesus and the devil are brothers because it was something he had heard, adding that he never thought his query would appear in the story. On NBC's "Today" show, Romney said "attacking someone's religion is really going too far."

Huckabee says he told Romney today that he would never make an issue of any point of Mormon doctrine, adding that the former Massachusetts governor's response "was gracious."

"He believes that appeals to prejudice have no part in this campaign," Fehrnsstrom said, referring to Romney. "While it's fair to criticize an opponent's record or policy positions, it's out of bounds to question a person's religious beliefs."

Asked earlier if he believed Huckabee was speaking in a coded language to evangelicals, Romney praised his rival as a "good man trying to do the best he can," but he added, "I don't believe that the people of this country are going to choose a person based on their faith and what church they go to."

Huckabee maintains that his question in the interview was taken out of context. A statement from his campaign said the full context of the exchange shows Huckabee illustrating his unwillingness to answer questions about Mormonism and theological issues.

"Governor Huckabee has said consistently that he believes this campaign should center on a discussion of the important issues confronting our nation and not focus on questions of religious belief," said Charmaine Yoest, a senior adviser.

"He wants to assure persons of all faith traditions of his firm commitment to religious tolerance and freedom of worship. Governor Huckabee believes that one of the great strengths of our nation lies in its diversity of thought, opinion and faith," Yoest added.

But Huckabee's campaign did not provide more information about the exchange, which the magazine reported this way in the article by Zev Chafets: "I asked Huckabee, who describes himself as the only Republican candidate with a degree in theology, if he considered Mormonism a cult or a religion. 'I think it's a religion,' he said. 'I really don't know much about it.'

"I was about to jot down this piece of boilerplate when Huckabee surprised me with a question of his own: 'Don't Mormons,' he asked in an innocent voice, 'believe that Jesus and the devil are brothers?"'

Huckabee has been surging in recent opinion polls, taking the GOP lead in Iowa and pressing closer to Rudy Giuliani in polling.

The former Massachusetts governor also was asked why he used the term "Mormon" only once last week in a highly publicized speech about religion in which he said he was proud of his faith.

"Actually, we prefer the name 'The Church of Jesus Christ of Latter-day Saints,"' he said. "'Mormon' used to be a nickname and I don't use it a lot, but now and then I do because people know what faith I'm referring to, and I talked about 'my faith' a number of times, and I don't imagine anybody is confused about what faith I have."

The authoritative Encyclopedia of Mormonism, published in 1992, does not refer to Jesus and Satan as brothers. It speaks of Jesus as the son of God and of Satan as a fallen angel, which is a Biblical account.

A spokeswoman for the Church of Jesus Christ of Latter-day Saints said Huckabee's question is usually raised by those who wish to smear the Mormon faith rather than clarify doctrine.

"We believe, as other Christians believe and as Paul wrote, that God is the father of all," said the spokeswoman, Kim Farah. "That means that all beings were created by God and are his spirit children. Christ, on the other hand, was the only begotten in the flesh and we worship him as the son of God and the savior of mankind. Satan is the exact opposite of who Christ is and what he stands for."

Romney also defended his first negative ad of the presidential campaign in Iowa, where Huckabee has erased Romney's long-standing lead in the polls. The spot, which began airing Tuesday, highlights Huckabee's support for in-state tuition for the children of illegal immigrants when he was governor of Arkansas, as well as his support for their being eligible for scholarships.

"I think Mike was desperately hoping that we would get through this without people taking a close look at his positions and his record, but his record on immigration, on pardons for criminals, on reducing the penalties for meth lab dealers, on taxing and spending - he increased spending from $6 billion to $16 billion. I think those features in his record will cause those numbers to turn around," Romney said.