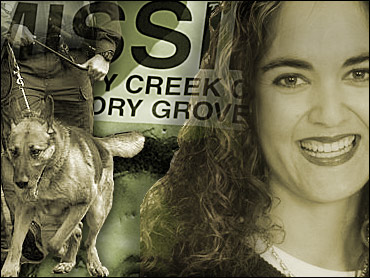 Police labeled Lori Hacking's disappearance a criminal investigation two days after she vanished, using that term to obtain a court order sealing details of a search warrant in the case.

While still calling it a missing-person case, police obtained the court order for one of the subpoenas they obtained to collect evidence. The order, a public document revealed Wednesday, says police did not want to tip off any possible suspects to a "criminal investigation."

Police have named Mark Hacking a "person of interest" in his wife's disappearance, but not a suspect.

Lori Hacking, a 27-year-old stock broker's assistant, was last seen by friends July 18, and her husband has said she never returned from a jog the next morning.

Mark Hacking's credibility came under scrutiny the day after she disappeared, when it was revealed he had been lying to his wife, family and police about having been accepted to medical school at the University of North Carolina. Not only that, the 28-year-old hospital orderly had not even graduated from college.

Police said Hacking lived a life of various lies for at least four of the five years he has been married. Hacking has been at a psychiatric hospital since he was found running outdoors naked the night after the search began.

Hacking's deceptions grew by another small measure Wednesday, when store clerks identified him as a regular who bought cigarettes, but asked that they not reveal the habit to his wife.

"We learned a lot of things in his life that are not true," said Detective Dwayne Baird. "Medical school was the pinnacle of that deception."

Hacking, a nightshift hospital orderly, was checked into a psychiatric ward by his family after being found outside, naked, a night after the search for his wife began. Assistant District Attorney Bob Stott said Hacking is free to leave the hospital

Police planned to return Wednesday night to a municipal landfill, following up on the tip of a neighbor who says someone may have used his plastic trash barrel to dispose of a body.

Police searched the landfill one night last week and again Tuesday without turning up a clue of her whereabouts. Detectives have described it as a daunting task, churning up 15 feet of garbage and dirt over a wide area. They are searching at night when dogs work more effectively in the cooler air.

Also Wednesday, the families of Mark and Lori Hacking shut down their volunteer command post at a Mormon meeting house after calling off an organized search of neighborhoods, industrial areas and nearby canyons. The volunteer search may resume later.

"Police have indicated to us that the apartment is no longer considered something they need for evidence and so the family was free to do with it what they needed to," said family spokesman Scott Dunaway.

Despite published reports that the Hacking apartment may have been the scene of a "rage killing," police tell CBS News there is simply no evidence of that, and have even allowed the family back into that apartment to move things out, reports Correspondent Lee Cowan.