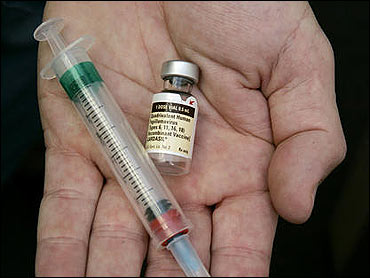 Jenny was a healthy 13-year-old living in Northern California -- until 15 months ago when, her parents say, she received the third and final shot of the vaccine designed to protect against human papillomavirus (HPV).

HPV causes a large percentage of cases of cervical cancer.

Soon after getting that third injection, her parents say, Jenny began experiencing the first signs of a degenerative muscle disease. They say she's their daughter is now almost completely paralyzed.

Did Gardasil cause Jenny's condition?

Her family told CBS News it believes "there may be a link. But, there is no medical consensus on whether this hypothesis is stronger than other possible explanations."

Merck, Gardasil's maker, disputes that, saying in a statement, "Based on the facts that we've received, the information does not suggest that this event was causally associated with vaccination."

Jenny's father hopes a blog he started will prompt other teens with similar post-vaccination problems to come forward.

U.S. News & World report says there have been other possible adverse effects associated with Gardisil, though none has been confirmed.

The New York Post also says Gardasil may be causing some medical problems.

Cervical cancer is the second most deadly cancer women's cancer.

Since the Food and Drug Administration approved Gardasil in 2006, some 8 million girls have received at least one of the three shots, with 13 million injections administered in all, the FDA says.

On The Early Show Monday, Dr. Holly Phillips of CBS station WCBS-TV in New York told substitute anchor Tracy Smith, "At this point we shouldn't be more worried than we've ever been. I think the biggest concern is -- parents want to know that, when they give the shots to their children, they're protecting them, not putting them in harm's way.

"Even though a case like Jenny's is incredibly tragic, we also have to be fair and make it very clear that it has not been linked with Gardasil. We understand the family's hypothesis, but still, the FDA, CDC (Centers for Disease Control and Prevention) have not linked her case with Gardasil."

Putting things in perspective, Phillips said, "It has been tested on thousands and thousands of women before it ever hit the market. And, already, 8 million women have gotten the shot. So, it's really a relatively small number of complaints we're looking at, but they should be taken seriously. Yet, it's not time for parents to pull the plug and say, 'This is too risky for my child.' "

Phillips said other reports of possible problems stemming from Gardisil have been received on the CDC and FDA's VAERS (Vaccine Adverse Event Reporting System), on which anyone (substantiated or not) can report side affects they feel they are having to a drug or shot.

The feds, says Phillips, take VAERS "very seriously. Every week, they actually sit down and look at these complaints. And what they're looking is not just an individual case, but they're really looking for multiple links where several women had the same effect."
MMVIII, CBS Interactive Inc. All Rights Reserved

Pains You Should Never Ignore