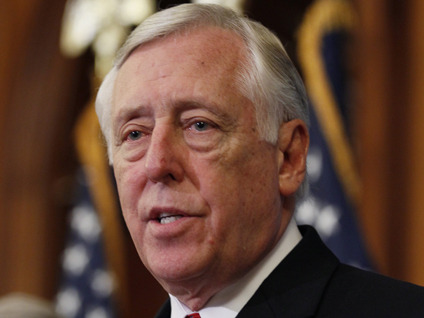 House Majority Leader Steny Hoyer and Pennsylvania Rep. Patrick Murphy will introduce a stand-alone bill to repeal "Don't Ask, Don't Tell" into the House this week, they announced today - a move that some say may pressure Senate Democrats to act quickly to pass their own version of the bill before the end of the year.

"As Secretary Gates and others have stressed, it is critical that Congress pass this legislation, empowering the Defense Department to implement repeal of 'Don't Ask, Don't Tell' itself, rather than have repeal imposed by the Courts," Hoyer said on Tuesday, in a joint statement with Murphy. "I look forward to bringing this bill to the House floor soon, and I hope the Senate will swiftly take action as well so that the bill can be signed into law as soon as possible."

Senate Republicans last week blocked debate on a defense spending bill that would have repealed "Don't Ask, Don't Tell," a military provision that prevents gays from serving openly in the military, by a vote of 57 to 40. (Sixty votes were needed to overcome a filibuster.)

Republican Sen. Susan Collins of Maine and Independent Sen. Joe Lieberman of Connecticut have since introduced into the Senate a bipartisan stand-alone bill that would repeal "Don't Ask, Don't Tell" - and according to the Washington Post, Hoyer says the House bill "reflects the Lieberman-Collins bill verbatim," meaning that both bills would echo the language used in the defense authorization bill that failed last week.

The bill's failure has largely been attributed to procedural objections rather than a lack of votes for the repeal, and many believe the Senate has the necessary 60 votes to pass the legislation.

Whether or not the vote comes to a pass, however, is largely contingent on whether or not Congress is able to pass a tax plan compromise relatively quickly.

A spokesman for Massachusetts Sen. Scott Brown, who supports a repeal of "Don't Ask" but who voted against the bill last week, said in a statement following the Dec. 9 vote that Brown would vote to repeal the military measure - but not until the issue of tax cuts had been addressed.

"Sen. Brown has said we need to prevent the looming tax hike and fund the government before we move forward with other legislation," said Brown spokesman Colin Reed in a statement. "He supports repealing 'don't ask, don't tell' once those issues have been addressed."

Murphy argues, however, that there is no time to wait on repealing "Don't Ask, Don't Tell."

"The time to repeal Don't Ask, Don't Tell has come," he said. "As an Army veteran of the Iraq War, I'm insulted by those who claim that our troops are somehow less professional or mission-capable than the troops of these foreign nations. I'm proud to stand with the Secretary of Defense, the Chairman of the Joint Chiefs of Staff, and the majority of servicemembers and the American public who all support repeal of this discriminatory policy that harms our national security and military readiness."

In a joint statement released this afternoon, Sens. Lieberman and Collins praised the efforts of Hoyer and Murphy in pushing for repeal.

"Repealing 'Don't Ask, Don't Tell' should not be just a promise unkept - we must take bold action to get it done," they said. "This step by our colleagues in the House shows the broad and very real commitment to repealing the unjust law before the end of the year."

House Speaker Nancy Pelosi said in a Tweet on Tuesday night that the House would vote Wednesday on Murphy and Hoyer's version of the bill, and added that "Senate action on #DADT is long overdue."