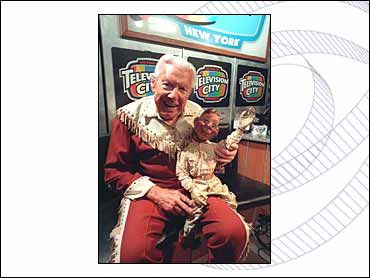 Howdy Doody got his day in court Friday, but it will be at least a couple more weeks before the custody battle over the freckle-faced puppet is decided.

U.S. District Judge Christopher Droney heard from a Detroit museum and the family of the Connecticut couple that pulled Howdy Doody's strings on the classic TV show which entertained millions of American children from 1947 through 1960.

The Detroit Institute of Arts contends NBC and puppeteer Rufus Rose planned to donate the original marionette to its puppet collection.

The museum has sued Rose's family, who claim there was never a legal agreement for the puppet to go to the museum.

At Friday's hearing, Droney questioned whether Rufus Rose had legitimate ownership of Howdy Doody. And, he noted that there may be no original puppet, since several Howdy Doodys were made, and heads, hands and feet were changed from time to time.

A lawyer for the Rose family argued that while Rose may have vaguely intended at one point to donate Howdy to the museum, he never formalized his intention and later changed his mind.

"That was Rufus' plan, (but) he never fulfilled this or any plan in his lifetime," said the Rose family's lawyer, Mark Block. "We believe the Rose family is the owner, and has the right to do with the (puppet) whatever it wishes."

Asked by reporters about the whereabouts of the disputed Howdy, Block said the puppet is "esconced in a bank vault in Rhode Island, resting comfortably."

The judge gave lawyers two weeks to submit written arguments. No date was set for a ruling.

The Howdy Doody Show was the nation's first ever nationally broadcast children's television program and NBC aired more than 2,500 live episodes of the show with Howdy, Buffalo Bob Smith, Clarabell the mute clown and other characters from Doodyville, U.S.A.

Buffalo Bob would shout "Say, kids, what time is it?" and the kiddie studio audience would scream: "It's Howdy Doody time!"

The puppet was designed by Velma Dawson and operated by Rose and his wife, Margaret, on the television show. Copies of the puppet were taken on the road, and one was bequeathed in 1980 to the Smithsonian Institution. Rose died in 1975, and his widow died in 1997.