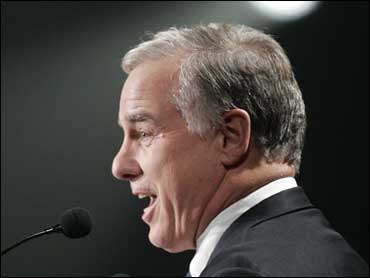 Outgoing Democratic National Committee Chairman Howard Dean said Friday he would have liked to work in the Obama administration, but instead is embarking on a life in the private sector after nearly 30 years in politics.

Dean told The Associated Press in an interview that he is weighing where next to take a career that has moved rapidly from family doctor to Vermont governor to presidential candidate to national party boss. This Wednesday, he ends a term as chairman in which Democrats recaptured the White House, seized majorities in Congress and picked up governorships.

Some of his supporters have been upset that after all he's done for Democrats, President-elect Barack Obama did not pick him for an administration job. When asked how he felt, Dean said he would "punt on that one."

"Obviously, it would have been great," Dean said in a telephone interview from his home in Burlington, Vt. "But it's not happening and the president has the right to name his own Cabinet, so I'm not going to work in the government it looks like."

Dean said he plans to make some money delivering speeches and share ideas about campaigns and technology with center-left political parties around the world. He said politicians in other countries are very interested in the technology that he used so successfully to raise money and organize his 2004 primary campaign and that Obama took to incredible new levels for his bid.

Dean also improved technology at the Democratic National Committee, building a database that tracks voters across the country. That database is now available to Democrats running for all levels of government, and each one that uses it adds more information from the voters they contact, which helps future candidates. Oddly, Dean said, the long divisive Democratic primary between Obama and Hillary Rodham Clinton helped the party by building the database since both were using it.

Dean said the other accomplishment he's most proud of is putting party staff in every state, even Republican strongholds. Other Washington insiders, such as Obama's White House Chief of Staff Rahm Emanuel, ridiculed the idea at first as a waste of resources. It ended up being credited by many observers as helping to contribute to Obama's victory over Republican John McCain in traditionally red states.

Dean said Obama was "very complimentary and kind about the 50-state strategy" when the two talked in Chicago's Grant Park after his Election Night victory speech. Others who overheard the exchange say Obama told Dean that he couldn't have won without him.

Dean says a lot of the credit for Democratic electoral gains last year should go to "an extraordinarily exceptional candidate for president." He had nothing but praise for Obama and the president-elect's choice to run the party, Virginia Gov. Tim Kaine.

Dean plans to meet this weekend with Kaine, then attend Obama's inauguration on Tuesday. The next day at a meeting of party members, he will turn over the gavel to the Virginia governor, whom he said was one of his top choices for the job because he's a Washington outsider.

"Tim gets that if you don't feed the base, and get your voters identified that you can't sustain the party," Dean said. "And it is true that in the past, it's been the norm for Democratic presidents to come in and take over the DNC and run it for their own uses and I think there's a good chance that won't happen this time.

"We put $5 million into Kaine's campaign, so I think Kaine is acutely sensitive," Dean said. "And so I think Tim has a particular appreciation of what a strong, diversified DNC can do."

The party had a $15 million debt from November's election, but Obama has helped pay that down and party officials say it should be completely paid off in the first quarter of 2009.

Dean also said he's optimistic about the outlook for Democrats in the 2010 midterm elections, even with the tough economic times.

"The reason I'm optimistic is because the country has no place to go but up. I think 2009 will be rocky, and then we'll start to see things get better in 2010," Dean said. He said by then, Obama should have closed the detention facility at Guantanamo Bay that has been the source of international criticism, improved health care and be on the way out of Iraq. "If that happens, I think we can still improve our situation, even though it's tremendous right now."