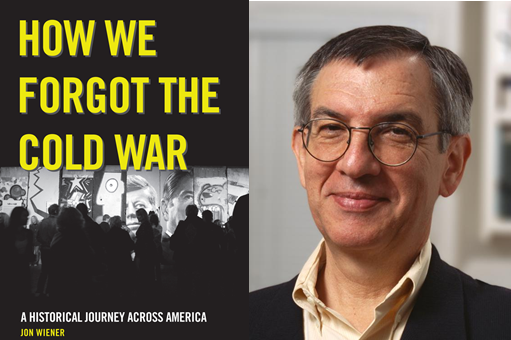 Jeff Glor talks to Jon Wiener about "How We Forgot the Cold War: A Historical Journey across America."

Jon Wiener: I took the tour of the Nevada Test Site and wrote about it for the "Politics of Travel" issue of The Nation magazine. The site was fascinating, and so were some of the other people on the bus. I said, "Let's do this again" - and found almost two dozen other Cold War memorial sites around the country, from the fallout shelter display at the Smithsonian to an exhibit about "Sgt. Elvis," America's most famous Cold War veteran, at the Patton Museum of Armor at Fort Knox.

It made for a book that began as a report on "what I did on my summer vacation": climb to the top of a radioactive mound at a former nuclear weapons factory west of St. Louis, take the tour of a Titan ICBM silo outside of Tucson; fail to get into the CIA's museum at Langley, Va.,  - it's closed to the public - and then succeed at getting into the museum of the ultra-secret National Security Agency at Fort  Meade, Maryland, which--amazingly--is open to the public.

JW: I was surprised about the response I found to the well-known argument that "Reagan Won the Cold War." Talking to people taking the tours and visiting the sites, I found widespread skepticism, along with some clear statements of disagreement. Pundits and political scientists had assumed the conservative media succeeded in shaping public thinking; but when it comes to the cold war, at least, I was surprised to see that the conservative media had failed. That became the main conclusion of the book.

JW: Doing more special projects in my teaching American history. At UC Irvine last year I took students on a field trip to the Nixon Library in Yorba Linda. I'd love to do a lot more of that sort of thing.

JW: "Billy Lynn's Long Halftime Walk" by Ben Fountain - it's a novel that's been called "the Catch-22 of the Iraq War." It's amazing -- hilarious and heartbreaking. Also re-reading "Nixonland" by Rick Perlstein - a richly detailed history of America in my lifetime, and a wonderful book.

JW: I'm finishing a book of my interviews with Gore Vidal: "I Told You So: Gore Vidal Talks Politics." He was a great talker as well as a great writer, and never more eloquent, or biting, than when addressing his favorite topic: the history and politics of the United States. The title comes from his line, "The four most beautiful words in our common language: 'I told you so.' "

For more on "How We Forgot the Cold War," visit Jon's website.

Georgia is now averaging 24 deaths over the past week, the highest level in nearly four weeks.