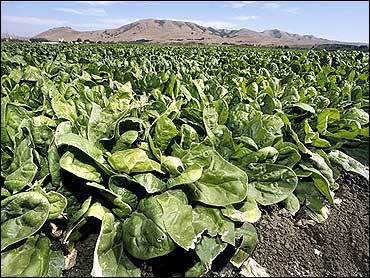 On its way to supermarket shelves, bagged spinach passes from field to packing plant to store, with several opportunities along the journey for it to become contaminated with deadly E. coli bacteria.

This complex chain is making it hard to identify the precise source of the outbreak that has killed one person and sickened at least 113 others around the country. Authorities have ruled out tampering, leaving multiple other potential sources of contamination, including the water and fertilizer that farmers in California's Salinas Valley use to grow much of the nation's spinach crop. Testing could reveal that source, though that isn't guaranteed.

It was reported Monday that The FDA linked a California company's fresh spinach to the outbreak, which has killed one person and sickened at least 108 others. Investigators are working to pinpoint the source of the bacteria. Possible sources include contaminated irrigation water, known to be a problem in the state's Salinas Valley, a major produce-growing area.

"At this time we have no evidence supporting tampering," FDA spokeswoman Susan Bro said.

From the time spinach leaves first poke out of the ground, the greatest threat comes from human and animal waste, the most common sources of E. coli.

Food health experts say the germ can be spread a multitude of ways — by manure, by contaminated irrigation water, by farmhands relieving themselves in the field, by inadequate washing by processors, by insufficient refrigeration that promotes the growth of bacteria in sealed bags of salad greens.

Leafy vegetables are the second leading source of E. coli infections in the United States, behind ground beef, but the government relies primarily on voluntary safety steps by farmers and packagers to prevent outbreaks.

A FDA spokesperson dismissed a claim by Natural Selection Foods LLC, the country's largest grower of organic produce, that its organic spinach products had been cleared of suspicion. "The FDA has not cleared any products from the list and continues to recommend consumers avoid eating fresh spinach products," Bro said.

Some 34 separate brands of bagged spinach are packed by Natural Selection, CBS News correspondent John Blackstone reports. Its variety of labels can be found in every major city and 74 percent of America's supermarkets.

Meanwhile, a Glenview, Ill., restaurant sued the California food company Monday, seeking compensation for spinach — infected or not — that had to be discarded, the Chicago Tribune reports.

Some consumer groups believe the government should do more to regulate farming and packaging, including the quality of water used for irrigation, the application of manure and sanitary facilities used by workers.

"The safeguards are not in place to protect fruits and vegetables in the same way that they are for beef and poultry," said Caroline Smith DeWaal, food-safety director at the Center for Science in the Public Interest.

Foodborne illnesses in the United States cost about $7 billion annually, including medical expenses and productivity losses from missed work, according to estimates from the federal government.

The U.S. food supply is governed by a complex system administered by 15 agencies. Lawmakers in past years have introduced legislation to make one agency responsible for food safety.

Federal officials have also raised concerns that the food supply is vulnerable to contamination by terrorists. Just before leaving office in December 2004, Health and Human Services Secretary Tommy Thompson said he worries "every single night" about a possible terror attack on the food supply.

Experts say there are several points of vulnerability on which public health investigators are focused:

THE FIELD: To keep spinach safe where it grows, the most basic precaution is preventing cattle and other farm animals from walking through the fields, said Kathy Means, a spokeswoman for the Produce Marketing Association and a co-author of the FDA's guidelines on the safe handling of leafy greens.

It is neither standard practice nor in accordance with federal guidelines to use raw animal manure on spinach. FDA guidelines allow composted manure if the decaying organic matter reached a high enough temperature to kill any disease-causing germs.

Also, bacteria thrive in water, and past E. coli outbreaks have been traced to contaminated water in the Salinas Valley, so farmers must make sure that water for crops is not drawn from sources that could contain runoff from cattle pastures.

Drip hoses along the ground are preferred to water sprayed from overhead, because they keep water from coming into contact directly with spinach leaves, Means said.

Farm workers also must keep their equipment clean, use bathrooms and wash their hands with soap and water. California agricultural regulations require that toilet and handwashing facilities for farmworkers be located within one-quarter mile or a five-minute walk from the work site, with one toilet per 20 employees of each gender.

But pressure from farmers may keep workers from using those facilities, said Marc Grossman, spokesman for the United Farm Workers union.

"Farmers do what are called 'speed-ups,' where they push workers to work faster and harder. Sometimes the workers feel under pressure to get that day's job done and don't take their bathroom breaks, especially if the facilities are far away from where they're working," Grossman said.

Employers whose workers use fields instead of the bathrooms can face fines of up to several thousand dollars, said Dean Fryer, a spokesman for the state Occupational Safety and Health Administration.

THE FACTORY: After harvesting, spinach goes to a packing plant, where it is washed and bagged.

The water used to clean the spinach should contain chlorine or a similar disinfectant, Means said, but those chemicals are not designed to kill bacteria already on the leaves. Instead, she said, the chlorine merely keeps water that touches a contaminated plant from passing bacteria on to other plants.

Studies have shown that the structure of spinach leaves make them especially hard to rid of germs, even when washed with treated water.

"It has a lot of places for them to hide," said Trevor Suslow, a food safety researcher at the University of California, Davis.

THE DISTRIBUTOR: Refrigerated trucks and warehouses must keep spinach cold to prevent germs from flourishing, especially in sealed bags.

Yet whatever precautionary measures are in place, industry watchers say you can only do so much to control nature.

"You can have a field out in the middle of nowhere grown with filtered water and filtered soil and be completely clean, and have a flock of birds fly over, and birds do what birds do, and the field then becomes contaminated," said Rochell Dornatt, spokeswoman for Rep. Sam Farr, D-Calif., whose district is home to Natural Selection Foods.

"We know that our producers will do whatever it takes to make sure that their product is safe, but we don't know what's causing this contamination, so until we find out what that is, we're not sure what to do."