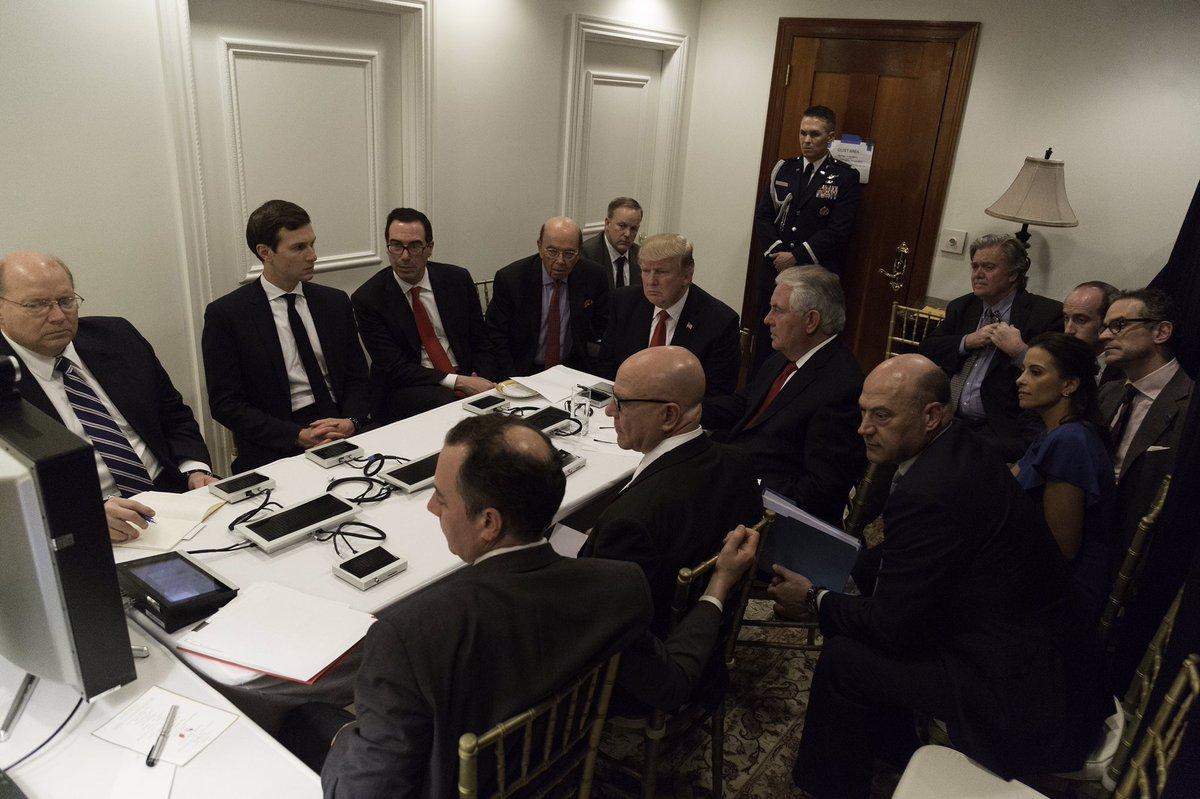 WASHINGTON -- The U.S. missile strikes Thursday on a Syrian air base were conducted without formal congressional approval. Some questions and answers about how and why presidents can conduct military action without permission from the 535 representatives of the American people.

Trump did let Congress know of his plans to launch 59 Tomahawk cruise missiles Thursday evening, targeting the air base from which Syrian President Bashar Assad launched a chemical weapons attack earlier this week against his own people, killing more than 80 men, women and children. A White House official said more than two dozen members of Congress, both Democrats and Republicans, were briefed Thursday by White House and Cabinet officials. House Speaker Paul Ryan, the No. 3 U.S. official, said he was among those informed.

WHAT’S THE JUSTIFICATION FOR UNILATERAL ACTION?

A U.S. official says as commander in chief, the president has power under Article II of the Constitution to use force overseas to defend U.S. national interest. The official said that the U.S. has a strong national interest in promoting regional stability, which the use of chemical weapons threatens. The official added that this justification is similar to what President Obama used in 2011 to use force in Libya. The White House also argues that the chemical weapons use violates a 2013 deal for Syria to get rid of them.

IS INFORMING THEM ENOUGH? DON’T THEY GET A SAY?

The War Powers Resolution, enacted in 1973, long after American troops began fighting in Vietnam, required the president to consult with Congress before sending U.S. armed forces into combat unless there already had been a declaration of war. The troops could not stay more than 90 days unless lawmakers backed the decision. The law also sought to give the president “leeway to respond to attacks or other emergencies,” according to the Council on Foreign Relations.

And it is that leeway that presidents George W. Bush, Barack Obama and now Trump have used to their advantage. Following the Sept. 11 attacks in 2001, Congress gave Bush authority to attack any countries or groups involved in the attacks, which was generally accepted to mean al-Qaida. Obama used that same authority to fight the Islamic State militant group, which emerged in 2014 as an outgrowth of al-Qaida. Trump has used that same authority to continue military action in Iraq, Afghanistan and Syria.

The Obama administration maintained in 2011 that U.S. involvement in the months-long air campaign against Libya didn’t require congressional permission because American forces were largely playing a supporting role as part of an international coalition.

In February 2015, Obama asked Congress to formally authorize war against the Islamic State, saying the militant group could threaten the U.S. homeland if left unchecked. His resolution would have limited authorization to three years, with no geographic restrictions for U.S. forces. It would have banned “enduring offensive combat operations,” an ambiguous term that attempted to define a middle ground between Democrats leery of another protracted Middle Eastern conflict involving ground troops, and Republicans, who largely believe the U.S. needs maximum flexibility to pursue IS.

Congress held a few hearings, but never acted on the proposal.

WHAT DOES CONGRESS THINK NOW?

Sen. Bob Corker of Tennessee, the Republican chairman of the Foreign Relations Committee, said before Thursday’s missile launch that he thought it would be prudent to consult with Congress, but didn’t insist Congress had to approve Trump’s actions.

Sen. Mike Lee, R-Utah, insisted that if the U.S. increased the use of military force in Syria, “we should follow the Constitution and seek the proper authorization from Congress.” Kentucky lawmakers Thomas Massie and Rand Paul, both Republicans, agreed.

“President Trump should make his case in front of the American people and allow their elected representatives to debate the benefits and risks of further Middle East intervention to our national security interests,” Lee said in a statement.