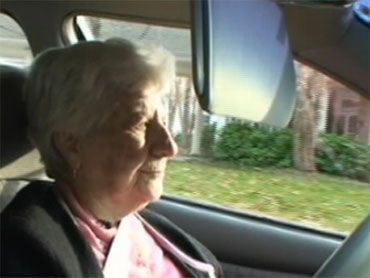 As the oldest baby boomers turn 65 next year, many of them see their parents still behind the wheel and wonder if it's time to put the brakes on mom and dad.

Miller shared a recent cell phone video that shows an elderly woman driving the wrong way down Pennsylvania's Interstate 95. And, in California, Miller reported, a horrifying scene resulted when a disoriented 86-year-old plowed into a crowded marketplace, killing 10 people.

Miller said both make a case for getting older drivers off the road. She added a new government report adds fuel, with findings that drivers over the age of 85 are four times more likely to die in traffic accidents than teenage drivers.

However, experts like Jodi Oshevski, a gerontologist with the insurance company The Hartford, say, not so fast.

Oshevski said, "Age has very little to do with it. The fact that a person's 88 doesn't necessarily mean they can't drive safely on the road."

Miller asked Turek, "What kind of driver are you?"

But Turek's daughter, Louise Cooke, says lately she's noticed something troubling. Miller said, it's something she found out with just a basic question.

Miller asked, "How many kids do you have?"

Miller said all three of Turek's children want her off the road.

Miller asked Cooke, "Do you think you're overreacting because she's 88 years old?"

Cooke said, "Am I overreacting? Maybe. But I'd rather be on top of it than kind of ignore it and say, 'You know, maybe it'll go away.' Because it's not gonna go away."

So Cooke signed her mother up for a comprehensive driving evaluation, conducted by occupational therapist Mary Roberts.

Turek's vision, reaction time and movements were all excellent, but when Turek hit the road her daughter's suspicions were confirmed.

Roberts told Turek, "Anywhere you can get out, the way we came in."

Turek said, "We came in down there didn't we?"

Roberts responded, "No, we didn't. We just came in here."

Later, Turek said to Roberts, "You're losing me."

And by the end of the test, Roberts gave Turek a reality check.

She said, "Eventually, you're gonna find yourself getting lost, because you're gonna forget where you're going. It puts you at a very high risk of a crash! It's here. The time is now."

Miller noted, "So began the conversation that so many families are now facing and so many elderly drivers are resistant to hear."

Cooke said to her mother, "You should give up your car keys."

Turek said, "I'm not going to give up my car keys. ... I just can't imagine not being able to drive."

Roberts said, "That's what you need to talk about is, you have to start imagining that."

Miller said Turek is now facing the reality of leaving 70 years of driving behind. Experts say it won't always end up like this, but it's important for families to at least have the talk - no matter how painful - to prevent potential tragedies.

Knowing when and how to ask an elderly parent to stop driving is one of the toughest things a family can face. On "The Early Show" Wednesday morning psychologist Dr. Jennifer Hartstein discussed some of the do's and don'ts of how a family should go about talking with elderly family members about driving.

Click on the video below for her tips on when and how to broach the topic.

Resources on senior driving:
• Bring the older adult to the DMV and have them take the written, vision and driving test.
• Reach out to DMV to find out the guidelines and if your parent can pass the components to be a safe driver.
• AARP sponsors a driver safety program to help people deal with aging issues and driving.
• Association for Driver Rehabilitation has specialists that can help improve an older person's driving or test to see if he/she can still drive.
• The AARP and National Highway Traffic Safety Administration created a booklet on this topic.
• The Hartford: Talk with Older Drivers