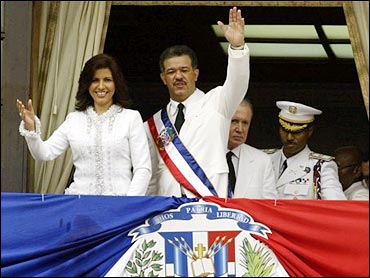 Leonel Fernandez was sworn in as the Dominican Republic's president Monday, returning to power after four years out of office to lead a nation struggling through its worst economic crisis in decades.

Fernandez, a 50-year-old lawyer and author who spent much of his youth in New York City, took the oath of office in Congress before hundreds of people.

"We are in the midst of a titanic fight to return to our roots and emerge from our ashes," he said in his inaugural address. "It won't be easy, and difficult moments lie ahead."

He promised to cut spending by 20 percent, saying that many government jobs created since 2000 would be eliminated and that he would reschedule debt payments.

"From this instant on, we start a period of austerity," Fernandez said.

Fernandez, who as president from 1996 to 2000 presided over relative stability, trounced outgoing President Hipolito Mejia in May 16 elections by promising a return to progress.

"How is it that it that in so little time we've gone from a paradigm of Latin American progress to a new archetype of failure?" Fernandez said while Mejia sat passively nearby.

Fernandez urged Congress, controlled by Mejia's party, to increase taxes on tobacco, telecommunications and international travel by 10 percent to 20 percent.

The government inherits some $7.2 billion in debt - nearly double the amount in 2000. "Now we have to pay it back and the bad thing is we don't have it," Fernandez said.

Despite the sometimes stinging words, Mejia and Fernandez embraced as the speech concluded.

The government also inherits worsening power outages and a desperation among the poor that is driving thousands to risk illegal voyages by boat to the wealthier U.S. territory of Puerto Rico.

U.S. authorities have intercepted more than 7,000 Dominican boat people in the last 10 months. Last week, authorities rescued 39 Dominicans who drifted for 10 days after their motorboat broke down on the way to Puerto Rico. Forty-seven others disappeared at sea - many of them jumping overboard in desperation - and eight died of dehydration after being rescued.

Fernandez will likely face unpopular decisions in trying to address 16 percent unemployment, 32 percent inflation and a Dominican peso that has lost half its value against the U.S. dollar in two years, doubling prices in the Caribbean nation of 8.8 million.

"This crisis will last at least two years and will be painful," said Miguel Ceara-Hatton, an economist with the U.N. Development Program in Santo Domingo.

Fernandez stepped down in 2000 due to a single-term limit that was later rescinded. He left office amid a scandal involving $100 million allegedly embezzled from a government fund. He denied wrongdoing, but his successor, Danilo Medina, was easily defeated by Mejia in elections later that year.

After the ceremony, Fernandez swore in 30 Cabinet members and other top officials, many of whom served during his previous administration.