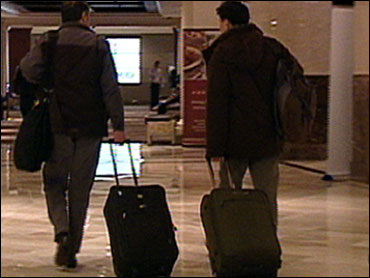 The Department of Homeland Security issued advisories to local police departments around the country last week, telling them to be on the lookout for suspicious activity at luxury hotels.

So how safe is your hotel from threats of terrorism or crime? And what are hotels doing to make things better? Even more important, what can you do the next time you travel to a hotel to improve your own security chances?

CBS News travel editor Peter Greenberg explained that while we've learned many lessons since the attacks on September 11th, terrorism is still a problem -- especially at hotels.

"This is simply telling us that the threat of terrorism will always exist, and terrorists will most likely continue to target hotels because of their accessibility and lack of proper security," Greenberg said.

But in light of these statistics are hotels doing enough to tighten security?

"There's some work being done, but there's still a long way to go," Greenberg said.

"Trust me though," Greenberg said, "a large fatal explosion is a much bigger inconvenience."

In general, he continued, the most a U.S. hotel will do to increase security are things like installing more cameras, limiting access into the building, requiring key cards to get to guest room floors, and training staff to be alert to odd behavior. Until recently, Greenberg said, even security cameras or closed-circuit televisions on guest room floors was considered taboo. The measures, he said, that have been implemented also help prevent petty crime and assault, so the hotels' motives for doing so are manifold.

It's also worth noting, Greenberg said, that although the hotel industry is highly regulated -- down to how the bed is made -- there are no minimum standards in terms of security. So it's in the hands of the owners, he said, to decide how much money and resources they're willing to spend on increasing security.

However, Greenberg added hotels are doing a good job of "getting wired."

"Often times, hotels are interested in protecting their own interests as much as they are their guests and will install security surveillance systems to catch thieves, but these cameras are also keeping an eye on who's coming and going," Greenberg said.

A good example of that technology in action is the arrest of the Craigslist killer, Greenberg said, who was identified using surveillance footage captured in the hotel lobby. Almost every hotel has 50 to 60 cameras that you don't see, Greenberg said. But what's important from a terrorist threat perspective, he said, is that you need to look at visible security in the lobby.

But what can hotel guest do to keep their personal safety in mind in hotels?

Greenberg recommended keeping your eyes and ears open at all times and report any suspicious activity.

In addition, he suggested, being aware of others staying at the hotel, particularly with regard to the "Do Not Disturb" signs.

"If you notice the 'Do Not Disturb' sign on a door for more than a day or so, that could be a sign of trouble," he said. "In the Jakarta attacks, for instance, the terrorists checked into the hotel and then stayed in their rooms, and assembled the explosives there. A 'Do Not Disturb' sign hung on a door for an extended period of time needs to be reported. Sorry, honeymoon couples."

Also, make the staff aware if you notice multiple deliveries being made to one guest, Greenberg added.

"That could also be a sign of trouble," he said.

Also, Greenberg said hotel guests should be mindful of the clerk when they give you your room key.

Greenberg said when you're checking in, if the clerk hands you the key and also verbally announces your room number, ask for a different room.

"Hotels should train their staff to hand you the key with the room number written down on a card," he said. "The reasons are obvious. Criminals in hotel lobbies know right away what room you're staying in if the room number is announced."

You should also be alert when walking to your room, according to Greenberg.

"When a person is just checking in and headed to their room, it presents a perfect opportunity for a criminal to follow you and rob or assault you," he said. "So first off, if you feel uncomfortable going to your room alone -- and this is especially true for solo women travelers."

Ask that a uniformed staff member escort you there. Many hotel crimes -- ranging from robbery to rape to homicide -- are the result of "push-in" attacks, Greenberg explained. A criminal follows you at a distance as you walk to your room, he said, and waits for you to insert your card key into the lock to open the door. As you open the door and try to grab your bags to enter the room, Greenberg said, the criminal runs up behind you and literally pushes you into the room.

Also, don't forget to check the peephole before you open the door, Greenberg said. He added, don't use the "Please Clean the Room" sign, call housekeeping instead.

"The 'Please Clean the Room' sign is basically saying 'there's no one in here,'" he said. "And let housekeeping know that no one is allowed to be in the room when they're cleaning."