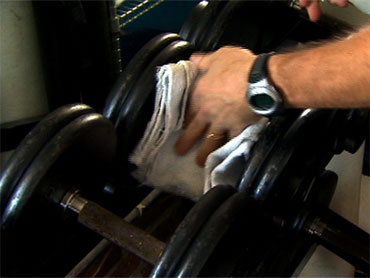 You go to the gym to get in shape. But if you aren't careful, that trip to the fitness club could be hazardous to your health.

She said, "That adds up to a lot of dirt and sweat, and as we found out -- a lot of germs. They say no pain no gain, but when you go to your local gym you want to get fit not infected."

And all those weights, bikes and barbells can be loaded with germs.

Hoff told CBS News, "I never thought that working out could cause a life-threatening infection. ... At one my point my arm got so big, my skin burst and shed like a snake."

So could a trip to the gym put you at risk? Koeppen and her team wanted to find out what was lurking on gym equipment -- so we swabbed surfaces at four major gym chains in New York City.

They sent their samples to Sanipure, a Food and Drug Administration and U.S. Department of Agriculture certified lab.

Ron Schnitzer, the lab director, said of the samples, "We had astronomical total bacteria counts in the many millions on just about every surface examined."

Schnitzer says the tests also found E. coli. The highest numbers came from a mat at one gym and a shower at another.

Schnitzer says at every location, Koeppen's team found pseudomonas, which can cause a nasty rash. The highest concentration was in a shower.

But Schnitzer says perhaps the most disturbing finding was the staph aureus detected on a locker room bench. He says that's an indicator some people could be at risk for contracting MRSA.

Schnitzer said, "We don't want to see staph aureus because that's an infection."

The National Athletic Trainers Association just announced new guidelines for preventing skin diseases at gyms, including using new towels for each wipe down and cleaning equipment before and after every use.

And gyms across the country are moving away from the spray bottle with a rag. At a gym in Pittsburgh members are now offered paper towels, and encouraged to use hand sanitizer.

Hoff has healed but still suffers from occasional numbness in her hand.

She says, "There are things out there that you can't see that can harm you and I want people to be able to prevent anything like that from happening to them."

The International Health, Racquet and Sportsclub Association told "The Early Show" maintaining a clean facility and protecting members is a top priority, adding, "It is important for clubs to educate their members about simple ways to increase cleanliness."

For more information on MRSA, go to MRSA Survivors.org.