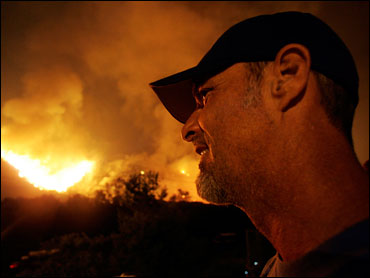 Skies in Southern California have an eerie, dirty look as smoke spews from the numerous wildfires that began raging Sunday and may still be days from containment.

Where there is smoke, there are health hazards, experts warn, perhaps even for healthy residents living miles from the fire zones.

"Even as far away as 20 miles, you can see some unhealthy effects of the fire damage," says Zab Mosenifar, M.D., a pulmonologist and director of the Cedars-Sinai Medical Center Women's Guild Pulmonary Disease Institute in Los Angeles. A Malibu resident, Mosenifar awoke Tuesday morning to find his yard and family cars covered in ash as the fire continued to blaze not far from his beach house.

Residents in fire zones and nearby areas are urged to take precautions, pay attention to symptoms that may be related to smoke exposure, and check the air quality in their immediate vicinity before spending any time outdoors, especially when exercising, Mosenifar and other experts tell WebMD.

Smoke from wildfires includes small particles of ash and other substances, water vapor, and gases such as carbon monoxide. The sizes of these particles affect the body differently, Mosenifar tells WebMD. Larger particles generally can't get into the nose and upper respiratory tract, he says, although they might irritate the eyes, outside of the nose, mouth, and skin.

But smaller particles -- those so tiny they are about 30 times smaller than the diameter of a human hair --can easily get into your respiratory system, he says. And there they can cause irritation in the lungs, runny noses, burning eyes, and aggravate existing heart and lung problems such as emphysema, asthma, and congestive heart failure.

While the bigger, heavier particles drop to the earth as the smoke billows out from the fire, the smaller particles can travel some distances, he says, depending on winds, temperatures, and other factors. "If you live 15 or 20 miles from a fire, you are still exposed to particles, but the particle size is smaller," he says.

How to Gauge the Smoke Danger

Use your senses to gauge the level of pollution from smoke exposure, says Frank Gilliland, M.D., Ph.D., professor of preventive medicine at the University of Southern California Keck School of Medicine, who studied the health effects of the 2003 California wildfires on children. "We tell people if they can smell smoke, it's at very high levels. They should use their own senses to tell them what they should be doing [in terms of outdoor activity]."

If people feel eye or throat irritation while outdoors, Gilliland tells WebMD, "they ought to alter their activity (and exercise indoors) until the levels abate."

Paying attention to symptoms -- and taking precautions such as exercising indoors -- is advised for a period of time after the fire is out, he adds. Those living in the California wildfire zones are probably wise to take precautions for two weeks, he says, depending on how quickly the smoke dissipates.

In research conducted after the California wildfires in 2003, Gilliland's team surveyed more than 6,000 elementary and high school students in communities affected by wildfires and found that those who didn't have asthma tended to have stronger symptoms from the smoke exposure than those who did, perhaps because those who had asthma took more precautions such as staying indoors during the fires.

Their study was published in 2006 in the American Journal of Respiratory and Critical Care Medicine.

Steps to Reduce the Health Hazards of Smoke

Simple measures can go a long way to reduce exposure to the particulate matter. "If you are driving through the (fire-stricken) areas, keep your windows closed and your air conditioners on 'recirculate' instead of outdoor air," says Anthony Gerber, MD, a volunteer spokesman for the American Lung Association of California and an assistant professor of medicine at the University of California San Francisco Department of Medicine.

If you must go outdoors and it's smoky, wear a dust mask or hold a wet towel over your face. Masks, available at some hardware stores and medical supply stores, filter out particles of various sizes. Gerber worries that masks may give a false sense of security. "You're not going to be fully protected by wearing a mask," he says.

When indoors, keep on the air-conditioning if it's smoky outside and use the recirculating setting if it's available, he says. Those with lung conditions such as asthma should continue taking their medication and call their doctor if their symptoms seem worse.

How Widespread Will the Effect of Smoke Be?

Predicting how far the smoke from California's wildfires will travel is difficult, Gerber and others say. Winds can carry it farther, for instance, and rain can dampen the spread.

"It could diffuse across the Mexico border," Gerber says of the San
Diego wildfire smoke.

"The most northern Mexico towns will be affected," agrees Mosenifar.
But he does not think neighboring states -- Arizona, Oregon, Nevada -- will be affected by California wildfire smoke.