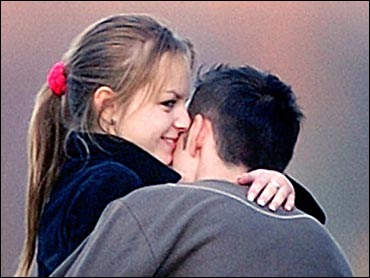 Some women never seem to be able to find "Mr. Right." They go from one bad boyfriend to another, leaving friends and families puzzled about their judgment.

"Learning How To Spot A Good Guy" is a featured article in the June issue of Cosmopolitan magazine, and editor-in-chief Kate White visits The Early Show to offer the highlights.

"Most women will tell you they've dated 'bad boys,'" White says. And in discussing "bad boys," she is not referring to dangerous, controlling men, men who threaten your safety by verbally or physically abusing you. She is not talking about men with anger issues, who might be secret gamblers or substance abusers. Those men are to be avoided at all costs. These "bad boys" are the ones who can't commit and will just drive you crazy when you try to have a relationship with them.

You have to figure out how to stop the pattern of picking the wrong guys. White says, "The problem is that once you've been through this kind of emotional wringer, you really start to doubt yourself. You ask yourself, 'What did I do wrong?' Well, you need to take a look at the pattern."

Review Previous Mistakes:
White believes that women can learn to make better choices by looking at the choices they've made in the past. She says, "The first thing you can do is step back and see if there is a pattern going on. Do you have a history of dating non-committal guys? What drew you to them initially? Was there something positive that appealed to you? Sometimes, you're drawn to the spontaneous, 'fun' guy and that really appeals to you initially. But then, you begin to see the spontaneous guy as one who becomes a 'rolling stone.'

"Look for the triggers," she continues. "Is he a risk taker? That risk taker might be attractive at first, but then, what if he takes risks with the relationship? Look at what attracted you in the beginning and see how that attraction manifested itself as the relationship progressed."

Awareness of the initial trigger can prevent you from being drawn into that trigger over and over.
Monitor Your Thoughts and Behavior
White says, "First, you need to learn to be a better observer. At the beginning of most relationships, we're caught up with 'how is he responding to me? Does he like me? Is he falling in like with me? Am I saying and doing the right thing?'

"Instead," White advises, "you should observe how he's responding to you. What is his behavior like? What kind of a guy is he? Is he a free spirit, and what do you already know about free-spirited guys? And is that what you're looking for right now?"

White adds, "Then it's important to monitor your thoughts and behaviors. One of the biggest things to watch is: What do you tell your friends? Do you edit what you tell them? Do you leave certain details out because you know your friends would say, 'You're kidding, why does he say/do that?' Are you holding anything back from your friends?"

And, what are you telling yourself about him? White says, "When he says something that doesn't seem right, are you saying to yourself, 'I know he doesn't really mean it'? Or, 'He doesn't know me well enough yet'? Watch what you tell yourself. Are you telling yourself, 'I know this is how he is, but I can change that'?" You cannot go into a relationship with a list of things to change.

While you're being a better observer, take a look at the other relationships in his life. White says, "It's key to look at his friends, family and relationships, even with ex-girlfriends. Guys who have long-standing friendships, guys who get along with their siblings and parents and have a nice stay-in-touch way about them are good guys. These are guys who value continuity. Relationships are important to them. They are more likely to be emotionally available."

Finally, in the being-a-better-observer area, you need to pay attention to what the guys themselves tell you. White says, "Listen to how they describe themselves. Do they say things like, 'I guess I'm trouble.' Or, 'I haven't found myself yet.'?"

White recounts the story of one young woman who fell for a guy who had a troubled work history and had trouble holding down a job because he couldn't get along with others. Initially, she saw him as a "maverick." But then, as she saw that he had a falling out with every boss he ever had and listened to him complain about how he "wasn't appreciated," she began to see him as someone who was antagonistic and who couldn't get along with others.

Update Your Criteria
White says, "Some boyfriend compasses need to be recalibrated. What worked for you when you were 19 (maybe you were looking for the free-spirited guy) may not work for you now. Now you have a new set of emotional needs. Part of understanding that is opening yourself up to accepting a new kind of guy. What are your relationship needs now?"

Postpone Sex As Long As Humanly Possible
White says, "Once you become involved in a sexual relationship, you are emotionally invested in this person and you lose your objectivity. The longer you can go without becoming sexual, the more likely you are to see the guy for who he is. It's easier to end a relationship because nothing's been invested emotionally."