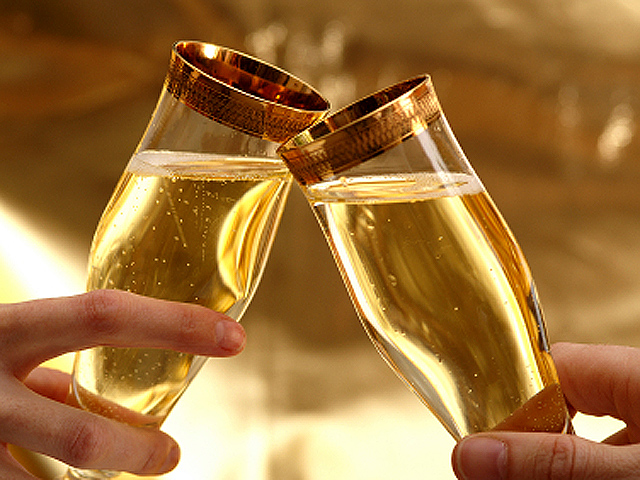 It's nearly time to break out the champagne for the final toast. Celebratory drinks to ring in the New Year are a time-tested tradition, but one that leaves many people stuck in bed with a hangover the morning after. Thankfully, there's plenty you can do to avoid overdoing it but still have fun.

Most healthy people metabolize about one 5-ounce drink per hour, so a very basic rule of thumb may be to try not to drink more than a single alcoholic beverage in that time period. However, it's difficult to predict how quickly an average person is likely to get drunk, since a number of factors play a part including gender, race, overall health, medications you take, as well as what you eat and which poison you pick.

Typically, people who weigh less will get drunk faster, though the percent of body fat is also a determining factor. A person who has a higher percentage of body fat is also likely to have a higher alcohol tolerance. Biologically-speaking, women are built to become intoxicated at a faster pace, because females produce less of an enzyme known as dehydrogenase, which is one of two liver enzymes responsible for breaking down alcohol.

Still unsure about your drinking threshold? Here's how to take part in the final fete of the year and avoid starting 2015 with a smashing headache.

Eat before and during the party.

Alcohol on an empty stomach goes straight to your head. Find out whether your host plans to serve dinner. If not, eat beforehand. Finger foods won't cut it if you're in for a night at an open bar. Some experts recommend eating foods that are high in zinc such as oysters, lean beef or lamb, spinach, pumpkin seeds and cashew nuts. The mineral is said to help aid the body's detox process. A 15-milligram zinc supplement can also help.

Other experts say high-fat foods stick to the lining of the stomach and slow down the absorption of alcohol in the body. Of course french fries and a cheeseburger will work, but foods that are loaded with "good" fats -- avocado, nuts and olive oil -- will also do the trick and be better for your diet.

Think about what you had the last time you were drunk.

Try to remember how many beers or cocktails it took to leave you three sheets to the wind last time you overdid it. Pace yourself to drink about half that amount.

Hydration is one key way to avoid suffering after a night on a bender. People who drink smart tend to alternate between booze and water or some other type of non-alcoholic beverage. You'll get drunk much slower at this rate and will be less likely to have a hangover the morning after. However, you may want to avoid carbonated beverages; some experts believe they make people get intoxicated at a faster pace since the bubbles are said to irritate the lining of the stomach, allowing alcohol to be absorbed at a faster pace.

Water down your drink.

Turn your wine into a spritzer with half a glass of seltzer or add some orange or cranberry juice to your straight vodka to lower the alcohol content.

Go with the lighter stuff.

Beer, specifically pilsner and lager, have a lower alcohol proof than champagne, wine or hard stuff like vodka, whisky and bourbon. You'll be drinking less alcohol if you have three beers rather than the same number of gin and tonics.

Before you head to the bar or party, make a deal with a friend not to go beyond a certain number of drinks. Keep tabs on each other throughout the night to be sure you both stick with the plan and support each other's efforts at impulse control.

No matter how old we get, it's sometimes difficult not to succumb to peer pressure, especially when everyone has a drink in hand. Look the part and order a club soda with a squeeze of lime, which can easily pass for a vodka soda, so you can go easy on the drinking without feeling self-conscious.

Plan another way to celebrate.

There are plenty of fun ways to mark the start of 2015 that don't involve copious booze. Cook a delicious dinner with friends, or go out to the movies and binge on popcorn instead of beer. (You can start your diet tomorrow!) If you're looking to get a jump-start on your 2015 exercise resolution, consider taking part in a New Year's Eve run, which have become increasingly popular in cities throughout the country. Or, if you're simply exhausted from the holiday season, there's nothing wrong with making it an early night so you wake up refreshed and ready for a great new year.