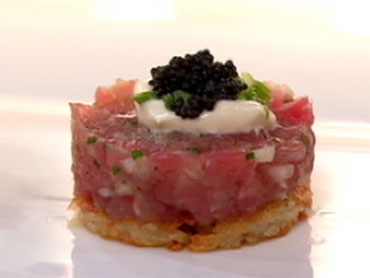 Hanukkah begins tonight at sundown and in many homes that means serving a traditional meal, which always includes potato pancakes, or latkes.

On "The Early Show" Wednesday, award-winning restaurateur and chef, Michael Schlow, demonstrated how to prepare some of his favorite latkes.

But what exactly are latkes?

Latkes or potato pancakes are shallow-fried pancakes of grated potato, flour and egg, often flavored with grated onion or garlic and seasoning. Potato pancakes may be topped with a variety of condiments, ranging from the savory (such as sour cream) to the sweet (such as applesauce or sugar), or they may be served ungarnished. Potato pancakes are sometimes made from mashed potatoes to produce pancake-shaped croquettes.

Latkes are traditionally eaten by Ashkenazi Jews during the Jewish Hanukkah festival. The oil for cooking the latkes is reminiscent of the oil from the Hanukkah story that kept the Second Temple of ancient Israel lit with a long-lasting flame that is celebrated as a miracle. Despite the popularity of latkes and tradition of eating them during Hanukkah, they are hard to come by in stores or restaurants in Israel.

METHOD:
1. Peel the potatoes and put in cold water. Using a grater or a food processor coarsely grate the potatoes. Place potatoes together in a fine-mesh strainer or tea towel and squeeze out all the water over a bowl. The potato starch will settle to the bottom; reserve that after you have carefully poured off the water.
2. Mix the potato and onion and egg. Mix with flour and salt and pepper.
3. Heat a non-stick pan and coat with a thin film of vegetable oil. Take about 2 tablespoons of the potato mixture in the palm of your hand and flatten as best you can.
4. Place the potato mixture in pan, press down lightly with a large spatula, and fry for a few minutes until golden. Flip the pancake over and brown the other side. Remove to paper towels to drain. Serve immediately.

You can also freeze the potato pancakes and crisp them up in a 350-degree oven at a later time.

For tuna tartare:
Combine the tuna with 1 teaspoon minced shallots, the thyme, lemon juice and olive oil and season with salt and pepper.
Just before serving, prepare the Scallion Compote.

For the scallion compote:
Place a small sauce pot over high heat and allow it to get very hot.
Add the scallions and cook 30 seconds, pressing down a few times with the back of a large spoon.
Add the shallots and cook 1 minute.
Add the butter and sugar, and season with salt and pepper.
Remove from heat, taste, and adjust seasoning if needed.

METHOD:
Place potato pancake in center of plate. On the side pancake place 2-3 slices of smoked salmon and a spoonful of red and gold beets. Garnish with frisee and arugula and drizzle plate with Beet Vinaigrette (recipe follows).

METHOD:
In a small saucepan over low heat, add the one cup of beet juice and simmer until the quantity reduces by half. Once juice is reduced, remove from heat and let cool.

Whisk together chilled juice, vinegar, chives, shallots and pinch of both thyme and sugar. Add oil in a slow stream, whisking, until desired consistency is reach. Serve warm or at room temperature.