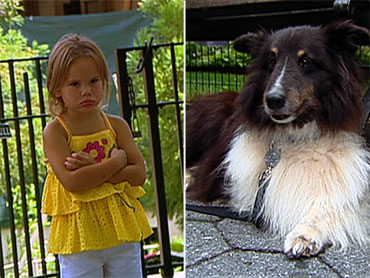 One of a parent's greatest nightmares is being separated from their kids in the park, at a mall, or maybe on the beach. All of us know how easily that can happen.

"Early Show" Consumer Correspondent Susan Koeppen shared some important advice for families on Tuesday for what to do.

Koeppen said, "This becomes panic mode for parents. Thousands of kids get lost every year, so parents need to be prepared. And experts say we also need to teach our kids what to do if they get lost."

Koeppen introduced Brooke Branch. Koeppen explained Branch always keeps a close eye on her twins. However, one day at the zoo, her son Quinn vanished.

"I was just looking everywhere, and I was frantic," Branch said.

Millions of parents know that feeling all too well. According to the Department of Justice, more than 2,000 children get lost or go missing every single day.

"If there is a phone number the parent is in the aisle, two aisles away, it takes minutes," she said. "But if the child doesn't know their name or their phone number it can take much longer."

And parents shouldn't assume that passersby will automatically help a child find his or her way home.

Starishevsky says a lost dog will often be rescued more quickly than a lost child.

Koeppen and her team wanted to see if that was true, so they took a well-trained dog and a child actress to a park.

Koeppen's team told 4-and-a-half year-old Olivia to pretend to be lost in a playground.

Our sheltie named Rascal was given a tag with our cell phone number. We let him wander around with his leash, making it look like he had run away from his owner. Within three minutes, Rascal was rescued.

Frank Buschor, who found Rascal, said, "I'm sure someone loves the dog so I wanted to find the rightful owner.

But what happened to Olivia? Even though she looked sad and was alone, plenty of people walked by. Some women noticed Olivia, but did nothing. Another woman even approached Olivia while chasing another child, but then walks away. Our expert wasn't surprised.

Starishevsky said, "People are often reluctant to help lost children because they are afraid of being perceived as someone who is trying to hurt the child, as opposed to someone trying to help the child. They also may think, mistakingly, that this is something that is going to take a lot of my time."

After an hour, a woman noticed Olivia and came to her aid.

Anya Roles, who saw Olivia, said, "I walked past and realized there was nobody really with her and I thought that could be my own child."

In the end, Koeppen pointed out, it took 20 times longer to rescue our child than our lost dog.

Starishevsky explained, "Often times the dog will be on a leash without their owner. So people can see that's a lost dog. They can also go up to the dog and there's dog tags on dogs with a number or contact information it makes it easy, there's no problem."

Expert say lost kids can be found much more quickly if they too carried emergency contact information and are taught what to do if they get lost. Teach them it's OK to approach a helpful stranger like a Mommy with children.

As for Brooke Branch, she eventually found her son at the zoo alone and unharmed. She's made sure her twins now know her name and phone number.

"It only takes one second to look down and your child is gone," Branch said. "So it could happen to anyone."

Koeppen added on the broadcast that it's a good idea for parents to have a current picture of their kids. One easy thing to do, she suggested, is to take your cell phone and take a picture that morning before you head into the zoo or the amusement park.