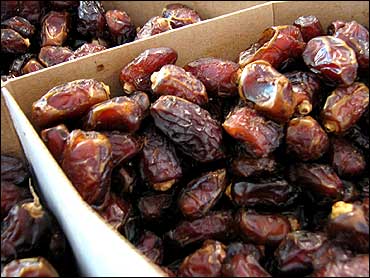 
Michael Rakowitz spent four months trying to get a date. Actually, make that a ton of dates.

The ton of dates never showed up. But when Rakowitz pulled up to his storefront in Brooklyn on Tuesday morning, he had 10 13-pound boxes of Iraqi dates in tow. To the best of Rakowitz's knowledge, those dates would be the first labeled "product of Iraq" to be sold in the United States in 25 years.

It was a long and arduous journey to New York from Hilla, Iraq. The dates traveled more than 6,000 miles through three countries and faced inspection by at least three government agencies. They were held at two airports, and by the time they made their debut at Davison's & Co. - the art exhibit-cum-import store run by Rakowitz - they looked a bit weary.

"They look dried. They do bear the markings of all they've been through since being off the tree," Rakowitz told CBSNews.com's Christine Lagorio.

The skin on the large, plump Kheary dates was peeling. The jewel-toned Azraq dates were small and a bit shriveled. But their age doesn't affect their status: These are legendary Iraqi dates, product of what is thought to be the world's most ancient cultivated fruit tree, grown in what may be the cradle of civilization.

They are sweet and rich, and some have a subtle nutty flavor. But few Americans have ever tasted them due to three decades of sanctions and embargoes that have made obtaining most goods from Iraq nearly impossible.

The allure of Iraqi dates in the United States can be compared to that of the Cuban cigar: difficult to obtain - and therefore expensive - but with a distinctive taste that makes it, well, worth it.

"I think that level of desire that is created from something that has a sort of adversarial history to it is always interesting when a desire builds around it," Rakowitz said. "But at the same time, it lives up to it."

Rakowitz, a 33-year-old artist who teaches at Northwestern University, began his attempt to import Iraqi dates by resurrecting the identity of the import business owned by his grandfather, Nissam Isaac David, an Arab Jew who fled Iraq in 1946.

It's unlikely that any hardheaded businessman would have attempted to import perishable fruit from a war-torn nation. But Rakowitz - fortunately - viewed the whole enterprise as a work of art.

"I view my projects as performing a necessary disturbance or jolt in everyday experience that will, maybe, slowly change our relationship to a crisis or a problem," he said.

Appropriating the business name, Davison's & Co., along with its typefaces and images from his grandfather's business, Rakowitz set up shop in the heavily Islamic Boerum Hill neighborhood in Brooklyn. On weekends he mans the storefront, which is provided by Art Assets and is financially backed by Creative Time, the Rockefeller Brothers Fund and the New York Foundation for the Arts.

Rakowitz already had an infrastructure for shipping goods into Iraq due to an interactive project called "Return," which consisted of a drop box offering free shipping to Iraq. A few members of the Iraqi community in New York took him up on the offer, sending a cell-phone charger, a bootleg CD of Microsoft Office 98 and a Paul Auster book - in Rakowitz's words, "everyday things."

"I loved how non-monumental they were," he said. "They were like portraits of the people."

Then one day while shopping in a Brooklyn import store Rakowitz picked up a can of date syrup, a common ingredient in Middle Eastern sweets. At the checkout, the clerk told Rakowitz, "your mother is going to love this - it's from Iraq."

The label said "Product of Lebanon."

Rakowitz was told that the date syrup gets pressed in Baghdad, is sent in vats to a canning facility in Syria and then gets labeled in Lebanon before hitting the Western market. Research showed him sanctions against Iraq were lifted in May 2003, making importing directly from Iraq legal. He wanted to give it a shot.

He put out a query on the Baghdad Business Center Web site, and met the general manager of Al Farez Co., who was willing to sell - and ship - one ton of dates from Iraq to America. He enlisted the help of prominent East Coast importer Sahadi Fine Foods to help with logistics. So began the saga of the dates.

As of Oct. 6, the date of Rakowitz's storefront opening reception - a gathering of well-heeled artists that resembled a Chelsea art gallery opening - the ton of dates was en route to Amman, Jordan.

Due to widespread violence in Iraq around that time, thousands of families were fleeing Iraq, clogging the Jordan border. The dates and their driver waited in line for four days.

Meanwhile, in Brooklyn, Rakowitz's white-walled storefront was buzzing. Attendees of reception drank wine and sampled Californian dates as a surrogate for the Iraqi ones that had not yet arrived. ("Some of these are grown in a city called Mecca, Calif., I kid you not," Rakowitz told the crowd.)

Neighborhood newspapers in Brooklyn spread the word, and Rakowitz took out ads in Arabic newspapers in Chicago and Dearborn, Mich. A Brooklyn store signed on to sell the dates, as did Fresh Direct, the urban grocery-delivery service. Soon, Manhattanites eager to get their hands on the next hot delicacy were trekking to Rakowitz's storefront.

Many signed up to purchase dates once - make that if - they arrived. Some seemed confused. Was this a store or an art exhibit?

"I enjoy the hybridity of it," Rakowitz says. "I'm very much a proponent of a public art that will enlist its public audience as vital collaborators in the production of meaning."

Read more details of the dates' journey on Rakowitz's blog.

One customer, Ibrahim Aljaf, a truck driver who lives in Brooklyn but grew up in the Kurdistan area of Iraq, said he stopped by Davison's & Co. when walking through the neighborhood and was delighted to hear Iraqi dates would be arriving.
The Iraqi date "is very sweet and very tasty. I think because of the water and the air and the nature over there," he said. "And here, there are only three or four kinds of dates, because they are the most popular. There, they have more than 70 kinds of dates, most of them you never hear of."

Actually, Iraq is said to be home to as many as 600 varieties of dates, though that number seems to be dropping. Now the country is home to 3 million date palms, down from 30 million three decades ago, before the Iran-Iraq war and the two Gulf Wars. But even though sanctions against Iraq were lifted three years ago, "bringing something in from Iraq is not a good business decision," Rakowitz says.

Pat Whelan, managing director of Sahadi Fine Foods, Rakowitz's importing partner, said he knew importing the dates from Iraq would be a "pain in the butt," but said Rakowitz's vision for the project was visionary enough that Sahadi joined in.

"The concept of doing this and trying to promote trade always heals wounds. It's amazing how small the world is when it comes to commerce," Whelan said. "You end up finding out that people are just people, trying to do ethical business."

Symptoms of the war were apparent on the Jordanian border, when after waiting for days, the ton of dates was turned back to Baghdad. Al Farez Co. was told by Jordanian border control that they needed to prove the dates had undergone a radiation scan.

Once they were scanned, and returned to the Jordanian border, the 2,000 lbs. of fruit was flat-out denied entry, due to "security concerns." At this time, Amman was filled with refugees who had fled fighting in Iraq and Lebanon. Even Atheer's family moved to Amman.

With the dates still in Iraq, Al Farez Co. would try another route out of Iraq: through Syria, which did not have diplomatic relations with Iraq at that time. To Rakowitz's surprise, on Oct. 20, the dates passed through the Syrian border and arrived at the Damascus airport.

There the dates encountered another roadblock. Syrian officials demanded a steep additional fee to waive some paperwork that would clear the way for the 200 boxes of dates to be put on a plane. Al Farez Co. refused, calling the Syrians' bluff.

"Eventually, these large stacks of boxes of dates will be blocking something they need. And then they will move it out to be shipped as we requested," Atheer told Rakowitz over the phone from Amman.

"We had to wait for the dates to become a physical obstacle," Rakowitz said. "I thought that was sort of beautiful. So we waited."

By Nov. 1, the Syrians had released the dates. But the weeks in a truck at the Jordanian border and sitting in an airport warehouse had taken a toll. The dates - a dried fruit that stays moist for up to three months - had developed some crystalization, a sugary coating on their dry, peeling skin. They were not rancid, but might appear so to USDA inspectors.

After three months of business arrangements, harvesting and travel, 2,000 pounds of dates had been spoiled trying to leave their country.

"The dates had been suffering the same fate as the Iraqi people," as many fleeing the sectarian violence get stuck at borders and are without resources far from home, Rakowitz said.

As a backup, Al Farez Co. opted to send a smaller shipment of 10 boxes express via carrier DHL. They would be Rakowitz's last shot of having Iraqi dates to offer from his storefront before it closed in mid-December.

This batch was detained for nearly 21 days once it was in the United States. But after inspections from the FDA, USDA and customs, the shipment was cleared for release Monday, and arrived at Davison's & Co. on Tuesday.

"It's somewhat bittersweet, because it's not like anything's going to change on the ground there," Rakowitz said. "And it raises questions about the infrastructure of the economy, because if no mutually beneficial trade relations are possible, how are the Iraqi people going to recover?"

It remains to be seen whether Rakowitz's art will prompt importers to spark new trade relations with Iraq. Sahadi, with whom Rakowitz worked, is weighing the possibility of importing more dates.

"We would consider it. The one I just tasted was really good," Whelan said as he bit into another Azraq date. "But the question is whether the U.S. will pay more for Iraqi dates than the standard California dates."

Rakowitz's next mission: to get 75 more boxes - nearly 1 ton - of Iraqi dates into the country. He's optimistic.

"Once those things become familiar, it becomes less strange the next time it happens," Rakowitz said. "It will make it closer to possible, closer to normal."
By Christine Lagorio