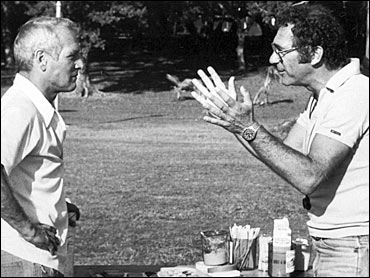 Sydney Pollack had the rare ability to use his acting experience as adeptly behind the camera as he did in front of it.

He won Academy Awards for best picture and best director for the epic "Out of Africa," but the former student of legendary acting teacher Sanford Meisner also turned up on screen in everything from his own productions to television's "The Sopranos" and "Will & Grace."

Think of his scene-stealing performance in 1982's "Tootsie," which he also directed, playing the exasperated agent of Dustin Hoffman's cross-dressing soap star. And that was the first time Pollack had acted on film in 20 years. And, of course, there was his pull-no-punches supporting role as an old-school lawyer in last year's best-picture nominee "Michael Clayton," which he also co-produced.

Along the way, Pollack, who died Sunday of cancer at age 73, used his unique relationship with acting - and Hollywood's finest actors - to craft a career of smart, complex, high-quality films.

Whether they were thrillers like "Three Days of the Condor" and "Absence of Malice," romances like "The Way We Were" and "Out of Africa," or even "Tootsie" - an unusual comedy for a director who clearly had heady ideas - Pollack's movies stirred something within his audiences.

You couldn't just sit there and watch passively; Pollack challenged you to feel, to respond, to walk out a little different than when you walked in.

With typical candor and humor, Pollack joked during a discussion at the 2005 Tribeca Film Festival that he enjoyed appearing in other people's films because it was "an excuse to spy on other directors."

"Directors are very territorial," he said. "They're like lions, urinating on every corner of the stage."

And he worked with some of the best: The list of fellow filmmakers who've directed him includes Woody Allen ("Husbands and Wives"), Robert Altman ("The Player") and Stanley Kubrick ("Eyes Wide Shut").

Even his films that weren't exactly commercial successes - "Sabrina" and "Random Hearts," both with Harrison Ford - at least had Pollack's trademark star power.

In all these various vestiges, several traits immediately and repeatedly emerged: intelligence and class.

"Out of Africa" (1985), perhaps Pollack's best-known film, oozed both. The sweeping tale of a woman's tragic love in colonial Kenya earned him both of his Oscars as well as Academy Awards for screenplay, cinematography, score, sound and art direction. It's the kind of complex, classic romance Oscar voters have long favored. But more than two decades later, it still stands up beautifully for both its lush imagery and relevant politics.

In accepting his Academy Award, Pollack was quick to praise the film's star, Streep, who was nominated for best actress but didn't win. "I could not have made this movie without Meryl Streep," Pollack said. "She is astounding - personally, professionally, all ways."

Toward the end of his life, it only made sense for him to team up in a production company with another Oscar-winning director, the late Anthony Minghella, who shared his love for quality material ("The Talented Mr. Ripley," "Cold Mountain"). And fittingly, the last movie Pollack directed paired him with yet another influential figure, architect Frank Gehry, the subject of his 2006 documentary, "Sketches of Frank Gehry."

If this critic had to pick a favorite among Pollack's many films, though, it would be an early one: 1969's "They Shoot Horses, Don't They?" It was only his fifth movie, but earned Pollack his first Academy Award nomination for best director. The story of a grueling dance marathon during the Depression helped make a serious actress of Fonda, who was best known at that point for the campy "Barbarella." But while she was clearly the star, the film was a provocative portrait about a cross-section of disparate people who share a dream and struggle to keep it alive.

In the years that followed, Pollack clearly shared his dreams with many superb actors, to wonderful effect.

"Most of the great directors that I know of were not actors, so I can't tell you it's a requirement. On the other hand," Pollack once said, "it's an enormous help."