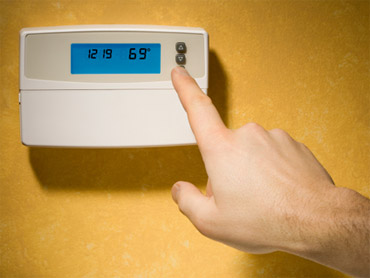 Ever wonder why one room in your home is nice and toasty and another is freezing cold?

"Early Show" consumer correspondent Susan Koeppen shared on the broadcast some places you may not think of checking to make your house warmer.

Koeppen said making your house more airtight comes down to two main things: Do you have the right amount of insulation? And, have you sealed up all the cracks?

Koeppen turned to Lynette and John Malone. The Malones know their home is cold - but they didn't know why.

In her house, Lynette told Koeppen, "You can feel a draft coming through here right now."

Cold air was seeping into the basement, and in the Malones new kitchen.

John said, "In the recessed lights, you can feel almost a coolness."

However, the couple's biggest concern was upstairs in the bedrooms. They use space heaters there to keep their kids warm.

So do the Malones know why their home is so cold?

Lynette said, "I think some areas might be the windows, might be some older doors, but other than that I don't know."

To get to the root of the cool air, Koeppen's team brought in professionals from Pro Energy Consultants, a home energy audit company, to perform an audit on their house to see what this family needs to do to keep their house warm.

Mark Cannella, of Pro Energy Consultants, said, "We don't guess at it. We can actually identify exactly why they have high energy bills or why they have comfort issues."

The audit begins by first sucking all the air out of the house.

Cannella said, "As we pull air out of the home, air has to come back in, and that helps us understand where all the pathways or holes in the home exist."

Cannella said of the Malone's home, "We've got all kinds of air coming in."
Next in the audit, thermal imaging detects cold spots - which appear in blue. The high-tech equipment can even see behind walls.

Cannella said, "We use an infrared camera which is kind of like an x-ray for the home."

In these audits, Cannella has seen some unfortunate images, such as disconnected ductwork and missing insulation.

And in the Malone's baby room, Cannella found warm air was leaving through a register and missing insulation in the ceiling.

Koeppen pointed out that the problem wasn't in the windows after all.

Cannella said, "It's really not all that bad."

The audit blames heat loss in the Malone's home on "poor thermal insulation," and duct work that was "never sealed properly" -- fixing those problems could save the Malones nearly 20 percent on their heating bill.

The Malones said they were "very surprised" by the results.

John said, "It just helped us realize what the true problem was."

Koeppen added on "The Early Show" it will cost about $2,000 to install more insulation and fix the leaks -- less than half the cost of getting new windows.

Don't have the cash to pay for a home audit? You can do it yourself.

Koeppen shared these tips on "The Early Show":

• Check insulation on your own. The Department of Energy says only about 20 percent of homes built before 1980 are properly insulated. Check the attic, garage, and basement for insulation -- those usually have exposed walls where you can see the insulation. For interior walls, such as a bedroom, turn off the power to the electrical outlet in the room, remove the outlet cover and use a flashlight to take a peek at the insulation.

• Check for air leaks: You can get a smoke stick at a home improvement store. On a cold, windy day, turn off the furnace, walk around the house with the smoke pen and put it up near windows and doors and other spots that may have cracks and if the smoke starts going sideways and blowing back into the room you know you have a leak. Also, do a paper test. If you can close a window or door on a piece of paper and pull it out without tearing -- you are losing energy.

• Use caulking and weather stripping: Fixing leaks can save you between five and 30 percent a year on your energy bill.