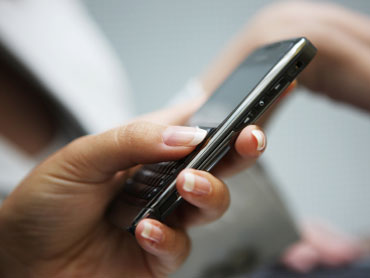 Aron Embry, of Cedar Hill, Texas, was talking on his new Motorola Droid phone when he says it suddenly blew up, leaving him with an injury to his ear.

Luckily, he didn't suffer any hearing loss, and Motorola is investigating.

But could this happen to you?

While rare, cell phones can explode. But how?

On "The Early Show on Saturday Morning," C-NET technology contributor Katie Linendoll explained the most popular type of battery in most electronic devices now is a lithium ion battery because in many cases they hold six times the charge and are lightweight, which us perfect for portable consumer electronics including laptops, mp3 players and cell phones.

However, they can get really hot.

Motorola, the maker of the Droid, released a statement saying, in part: "We have no reason to believe the phone 'exploded,' as it is still operational and intact. ... We have contacted the consumer and will investigate this thoroughly."

So while they continue to investigate this particular incident, it's not unheard of. Just how big of a problem is this?

Linendoll said, "We are seeing - and have seen - very specific examples of this, but battery recalls are nothing new on a much larger scale. As a preventative measure, in the past very big brands have taken a hit on major recalls.

"Sony, as many may remember took a very big image hit a few years ago when an estimated 10 million lithium ion batteries were recalled at risk of short circuit.

"And Nokia also recalled over 46 million batteries at risk of overheating and exploding a few years back. And even a big name like Dell has had to recall tens and thousands of laptop batteries from the US Market in the past."

Linendoll offered these tips for your devices:

Don't Buy A Counterfeit
Rapid growth in counterfeits equals loss of quality control. Understand these units are built cheaply. Counterfeit phones and other electronics are an estimated $100 billion global problem. So be wary of too-good-to-be-true deals on eBay and Craigslist. Ask questions like, "Is there a legitimate model number on the phone that matches with the manufacturers website?"

If you're not tech-savvy, think of it like shopping for a knockoff purse! Are the logos out of wack, is something is misspelled. Is there a warranty? All smartphones come with a limited warranty. Shop from a certified retail location.

Linendoll added it's unknown if the Embry's phone was a counterfeit.

Protect from Heat and Water
Heat and electronics don't mix. It's easy to miss places as simple as a cooking surface in the kitchen or leaving your phone in your car. Your car your car is a heat box. Sun can fry it in one grocery run.

Water and electronics don't mix. Do not get your phone or battery wet. It might appear to be fine, but could lead to corrosion and eventually a short-circuit. And water damage isn't typically covered by warranties.

Heed the Warning Signs of a Defective
If your device is becoming very hot and is uncomfortable to touch, it's probably a sign of something wrong with the battery.

Make Sure Cell Phone is Compatible with Batteries and Chargers
Every charger is designed to match a certain voltage and current level - if it doesn't match, it could fry it. If you're not sure, call the manufacturer. Just because the plug sits in your phone, doesn't mean it's right.