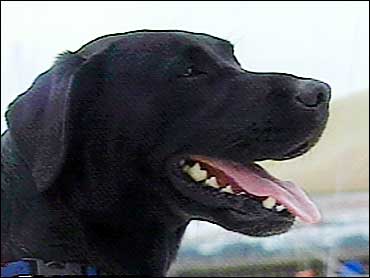 To many people, dogs are like surrogate children and, just as we can measure our kids' IQ, there are a number of tests to measure a dogs' brainpower.

The Early Show resident veterinarian Debbye Turner shows how you can tell if your dog is a canine Einstein.

Assessing your pet's IQ:
Turner says, the best way to measure intelligence in dogs is to assess their "problem-solving" skills; this method is also true of humans. Obedience is another way, the more tricks you can teach a dog, the smarter he is. This may not necessarily be true, but it will definitely impress people. And persistence is also a measure of smarts. A dog that keeps trying to solve a problem until he succeeds is considered sharp.

Smart breeds:
Owners and breeders of Border Collies have long proclaimed the superior intelligence of this energetic, loyal breed. They are natural "herders." Without any training, they will instinctively herd cattle, sheep, and children.

The fact is, almost all dogs can be trained (even old dogs). And almost all dogs are territoria,l which makes them good "watch dogs". Unfortunately, Basinjis, Bulldogs, and Afghan Hounds have the dubious distinction as the "dumbest breed." But they can be great pets in the right home.

The tests:
Here are some "tests" that Turner will demonstrate:

If your dogs scores 6 points or higher he is sharp as a tack. If he scores 4-5 points, he is average (and cute!). If he scores 3 points or less, well.... let's just remember that he is your best friend!

Here are other tests that are done:

More about the intelligence of dogs:

In a dog, adaptive intelligence has two main components: learning ability (which observes the rate at which a dog can learn new relationships) and observational learning (which is natural learning that allows certain associations between conditions and outcomes to form, but does not require direct involvement on the part of the observer).

Sometimes, intelligence tests tell a lot about the smarts of the tester as well as the tested. Fortunately for all of us, intelligence is not a prerequisite for love. It shouldn't be for a dog either - if he doesn't do well, just remember that anyone can be too smart for their own good.

Do you really want a dog that can open the refrigerator, operate machinery or run up the credit cards?