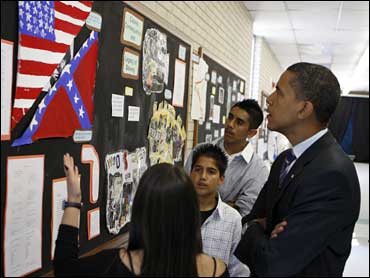 This column was written by Dean Barnett.

Early last evening, I was speaking with a friend and he jokingly asked if Obama had made any gaffes during the day. "Well," I responded, "only if you consider his claim that his uncle was one of the first soldiers in to liberate Auschwitz a gaffe." My friend laughed, knowing that the Red Army had liberated Auschwitz and figuring that it was highly unlikely that Obama had an uncle who was a foot soldier for Stalin.

Some people think that Obama was caught red-handed in a lie with the statement about his uncle. That's ridiculous. He did have a great-uncle who served in Europe during WWII and was one of Patton's soldiers who liberated the Ohrdurf camp at Buchenwald. The mangling of facts here isn't a lie, just another misstatement and another surprising sign of Obama's historical ignorance.

The facts that Auschwitz was in Eastern Europe and that Eastern Europe was the Soviets' theatre aren't exactly obscure historical data-points. One would expect the typical "Jeopardy!" contestant to know as much, and one would certainly expect a presidential candidate who is basing his campaign in no small measure on his vaunted (and purportedly un-Bushian) intelligence to know it, too. And yet such things keep happening.

But the time has come to be more precise with our terms. Yes, Obama undeniably has a high level of cognitive ability. But it's becoming increasingly apparent that he either has read few books or retained very little from the books he read. Either that or he's spent his time reading books that don't help him understand history and won't help him carry out his tasks as president.

Worse still, Obama seems to have a vague sort of arrogance that prohibits him from acknowledging what he doesn't know. If I were going to shoot my mouth off on WWII or the Cuban Missile Crisis with the world watching, I'd make sure I had my facts straight before I did so. For some strange reason, Obama seems allergic to having his staff perform even the most basic fact-checking.

And there's also what appears to be a lack of intellectual curiosity. Abe Greenwald of Commentary's blog calls our attention to this nugget from an enjoyable New York Times profile of Obama "body man" Reggie Love:

Along the way, some unofficial rules have emerged between the candidate and his aide. From Mr. Obama: "One cardinal rule of the road is, we don't watch CNN, the news or MSNBC. We don't watch any talking heads or any politics. We watch 'SportsCenter' and argue about that."

So how, pray tell, is Obama staying informed about what's going on in the world? When he's pressing the flesh at crummy rural diners and speaking before 75,000 adoring acolytes, he's talking, not listening. Don't you think a guy who might be president would be obsessed with world events? Don't you think that obsession would have driven him into the race? And don't you think as a potential wartime leader he might be using his downtime to study, just in case he wins? For instance, Barack Obama obviously knows nothing of war, but he could help himself if he opted to read some Thucydides rather than watch SportsCenter.

Obama has made a habit of coming across like a man who doesn't know what he's talking about. That's bothersome enough, but what's more worrisome still is how comfortable he is with not knowing what he's talking about, and how convinced he seems that his rhetorical flourishes will obscure his ignorance. That strategy may work on the campaign trail, but it certainly won't help him govern.

You add it all up, and you got a guy who despite his high cognitive abilities doesn't know what one needs to know to be president. Jimmy Carter was also "a bright guy," but as a president and a free-lancing ex-president, his naivete and arrogance made him a functional dunce. If Obama really thinks the lesson to be gleaned from the Cuban Missile Crisis is that a president should always sit down with our enemies, then perhaps the same could be said of him.
By Dean Barnett
© 2008, News Corporations, Weekly Standard, All Rights Reserved