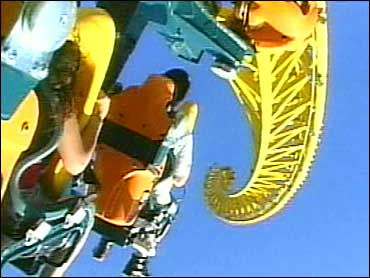 As summer gets under way, many people are heading to amusement parks around the country seeking fun and thrills.

In recent years, roller coasters have been built to travel faster in search of the ultimate ride. Critics say these new rides are dangerous; proponents claim that there is no evidence to support this.

For the last two years, Rep. Edward Markey (D-Mass) has been seeking federal oversight of amusement parks. His proposal, known as the National Amusement Park Ride Safety Act, would give the federal Consumer Product Safety Commission (CPSC) jurisdiction over the amusement park industry and establish a national G-force limit on rides.

Bill Powers represents the IAAPA (International Association of Amusement Parks and Attractions). He maintains that amusement parks are one of he safest recreational activities and that Markey is grossly overreacting.

Q: Why are you so opposed to government regulations here?

Powers: We are not opposed to government regulation, it is a complete myth that this industry is not regulated. Nearly every state that has a park has regulations for those parks — 42 states have regulations. So far it's been a great example of cooperation between us and the various states. Since 1981, the federal government (the Consumer Product Safety Commission) has had regulation over traveling/ mobile parks. And during that time span, the number of mobile parks has decreased but there are still the same number of injuries. So you could argue that under federal oversight, the parks have actually gotten more dangerous. At best, the parks certainly didn't get any better.

Powers: No, they are quite honestly one of the safest place in America. Amusement parks are the safest summer activity you can participate in. The CPSC (Consumer Product Safety Commission) reports 600,000 emergency room injuries from bicycles, 200,000 from soccer, 600,000 from basketball, 80,0000 from playgrounds, and 26,700 from those foot-powered scooters, including two kids who died. I don't understand how Markey can talk about regulating amusement parks when there are much more dangerous activities out there. I mean two high school football players pull 40-50 G's when they tackle each other and Markey isn't talking about regulating high school football or regulating scooters, or soccer, or fishing. You are ten times more likely to be injured fishing than at an amusement park. I mean this stuff is laughable. Last year, 12 people died being electrocuted by toaster ovens but there was only one fatality on a ride at an amusement park. All I can figure is that Markey doesn't like amusement parks. There must be something that Congress can do to promote public safety other than pick on amusement parks.

Q: What kind of amusement park injury numbers are we talking about here?

Powers: 320 million people visit amusement parks every year and the Consumer Product Safety Commission reports 6,500 injuries and one ride-related fatality. And the year before, we had zero fatalities. Over 95 percent of those injuries are twisted ankles, scraped knees, and sunburns. I'm not a mathematician but there are a lot of things people do every day that are a heck of a lot more dangerous. I can't believe anyone in Congress would waste their time with this.

Q: What about the safety record of roller coasters in particular?

Powers: There are 450 amusement parks in America, 606 roller coasters in North America, 320 million visitors, and about 3 billion rides were taken in 2001. But the CPSC doesn't break injuries down by which ride. There were 6,500 injuries total. Last week, a little girl got injured on a teacup ride in San Diego. So, injuries can happen on any ride, not just roller coasters.

Q: What can amusement park guests do to make their visit safer?

Powers: We post signs for our patrons to know the risks to know what they are getting into. Pay attention to those signs. You need to be a certain height and a certain weight to ride certain rides. Visitors should watch what they eat and drink. They should use sunscreen and drink plenty of water if it's hot out. Watch the rides before you get on them . Adhere to the safety signs, pay attention to the pre-existing conditions that may preclude you from riding a ride, listen to the ride supervisors, and security instruction. Our business is all about safety. We want people to have a good time and have a safe time so that they will come back. Parents trust us with the safety of their child and with themselves and that trust is core to our business. If people don't trust us they won't come to our parks. Safety is our business.

Q: So why is Markey so worked up about this issue?

Powers: I don't know when the last time Markey went to a park. I think he just found an issue to get his name in the headlines. But this is the most made-up contrived political issue I've seen on Capitol Hill in the 12 years I've been here. Ask the congressman to name another recreation activity that 320 million people participate in that has a better safety record.

Can you explain "G-force" to our viewers are simply as possible?

Powers:G- force simply means "gravity force." One G is the weight of you body and 2 G's is twice the weight of your body. When you take off in an airplane you pull about 1 and half G's, meaning you feel like you weigh about 1 and half times what you really weigh. Roller coasters pull more G-force by the angling and breaking of the curves, when you slow down quickly you're pulling G-force. When you go over a bump and feel like you have air in your stomach, you feel lighter, you are pulling negative G's and you are pulling positive G's when you feel heavier (like when you go upside down). Again, the key to G-force is duration.

Q: Markey's big beef is with G-force levels being dangerous because they exceed space shuttle levels. How do you respond to that criticism?

Powers: I met with two astronauts a few days ago, they have 8 shuttle missions between them, and when I told them what Markey said they shook their heads and laughed. The G-force issue is this: when you plop down in an easy chair, or cough, or someone pats you on the back, you are pulling the same G-force as on an amusement park ride. And while a ride lasts longer, the G-force portion is only a few seconds. The key issue with G-fforce is not how high (unless its very high levels like 8 or 9 G's) but the duration. In the space shuttle, you pull G's for several minutes (10-15 minutes), not the fraction of the second that a roller coaster pulls. The G-force level on a roller coaster is the same that ordinary people impose on their bodies in their everyday life. So the key is not G's but duration. The highest G's pulled on a roller coaster is between 5 and 6. I think the most might be that new X coaster in California. But, most coasters pull 3-4 G's for a nanosecond. And G-force levels haven't changed much since the '70s because the human body hasn't changed. Height and speed have nothing to do with G's. G's are about breaking and angling.

Q: So how do you explain the brain injuries that roller coaster riders have sustained?

Powers: The Brain Injury Association says that a traumatic brain injury occurs every 1.5 seconds in America. A few weeks ago, a 17-year-old boy in Florida died of a brain aneurysm while driving and an 8-year-old boy in Pennsylvania died of a brain aneurysm while watching TV. These things are tragedies but they just happen. Television doesn't cause brain injuries any more than roller coaster do. There are thousands of people walking around with a pre-disposition to brain aneurysms. If park rides caused them, you would see thousands of people with these sorts of injuries but you don't.

Q: What do think that Markey's proposition will be successful?

Powers: I think that he's gonna get in front of a television camera and that may be all he wants. I think most Americans understand that when you are in an amusement park you are participating in one of the safest forms of recreation in America. Even if you believe Markey's numbers, 58 injuries in 40 years isn't a bad record. And keep in mind that he got his numbers from Claus Peter Speth, a former New Jersey coroner who was indicted in the mid '90s for witness tampering after breaking a bone in a corpse to support his theory. There is no conclusive medical evidence to support any of his claims. Even the American Association of Neurological Surgeons doesn't agree with him. Markey really ought to go regulate something that presents a greater potential for injury like high school football. Federal oversight won't improve anything.

Q: Critics take issue with the fact that you are singling out amusement parks when there are far more dangerous activities out there, how do you respond to critics?

Markey: They've changed a lot of rules to make many things safer- remember they used to play football with leather helmets and no pads. We regulate baby carriages, bicycles, baby seats. We just don't regulate a kid in a roller coaster seat. Amusement parks need to be federally regulated.

Markey: No, because people go on vacation all around America. So there should be a uniform system of regulating these parks. A national standard is needed because the public is engaged in interstate commerce when they go to one of these parks. Americans assume that amusement parks are safe when they are not, so we need to make them safe.

How would your plan work?

Markey: Ultimately, state regulators would enforce the rules. But federal investigators should be the ones to investigate amusement park accidents and make sure that the information is disseminated to the parks in other states because if there is a flaw in a design in one park, then often these flaws are in other state's amusement parks as well. Under my plan, the feds would investigate, demand a correction in the defect, and then spread the information across the country.

What G-force limits did you have in mind?

Markey: I don't have a particular G-force number in mind. I want experts to determine what that limit should be. The same way that experts decided how padded football helmets needed to be. There should also be age limits for certain rides. Amusement park operators shouldn't be making these decisions.

Q: But for adults, isn't a warning enough?

Markey: I don't know at this point - all I know is that scientists need to look into this so we can develop standards. We know that there is a problem, but the amusement park people are in denial. Their only answer is that it is not as dangerous as other activities.

Q: The feds have been regulating traveling amusement parks since 1981 and injuries continue to occur there anyway. Why do you think that fed oversight of fixed amusement parks would do anything to reduce the number of injuries?

Q: So what is your most compelling argument for wanting the federal governmentt to regulate the amusement park industry?

Markey: People are being hurt, we can do something about it, and it would be irresponsible of us not to do so.