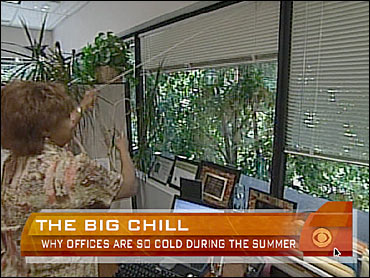 It may be 90 degrees in Denver, but Kim Devigil walks into work knowing the temperature is about to dive. "I bring sweaters, I always wear suit coats, and I have my space heater," says Kim, who works for MillerCoors.

You might expect the brewery to be ice cold, but not the office building. "In general, we're all cold, most all the time," says fellow MillerCoors employee Aimee Valdez.

"Isn't that crazy? And here we are at a time of $140 barrels of oil, and we are wasting that energy to make people uncomfortable," Denver's Mayor John Hickenlooper tells correspondent Hattie Kauffman. "Uncomfortably cold!"

So Hickenlooper decreed that all city buildings should raise the thermostat four degrees. "It saves money, it's benevolent to the environment and it makes people happy, right? It's more comfortable. What's not to like?" he says.

Wanting to cut their energy bills, Qwest and MillerCoors signed on as well, even if it meant warmer offices.

The companies that adopted the mayor's proposal may have thought they were asking their employees to make a sacrifice. But the workers Kauffman talked to welcomed the higher temperatures.

For some, like Kim, raising the thermostat four degrees barely makes a dent. "It's still cold," she says.

But others, like Aimee, say they extra four degrees have made a difference. "And I'm glad that we did it, too, because, you know, we don't need it that cold. And I'm sure it saves a ton of energy."

Some, like Helen Tanner, were caught unaware by the rising temperatures. "I did notice the temperature change. And I was complaining, it was like 'Wow, is it just me having a hot flash?'" she jokes.

Professor Alan Hedge from Cornell University visited The Early Show to discuss the issue. He is the director of Cornell's ergonomics laboratory and has studied the effects of cold offices.

He says many offices are way too cold in the summer. "We know that about 40 percent of people have problems with the temperature in these buildings throughout the summer," he says.

Asked what these cold offices do to productivity, Hedge says, "Our research shows productivity goes way down. People actually do less work and they make more mistakes when the temperature is too cold."

So why do they keep it so cold?

Hedge says there's no magic number when it comes to temperatures. "But there is a range. The reason there's not a magic number is your clothing, your activity level, those are things that are going to affect the temperature that you experience. But the magic range is actually higher than most buildings are set to. So if you can warm a building up to 76 to 78, then providing people are allowed to wear pretty loose and casual clothing, then you're going to find a lot of people are going to find that comfortable."

If you think that sounds too warm or that you might fall asleep in temperatures like that, Hedge points out, "Remember when you step outside in Denver it's in the 90's. Your skin temperature is around 90 degrees as well. You're not going to fall asleep at that temperature in the summertime. The important thing here is to remember for every degree you can raise that thermostat you're going to save about five percent on the energy bills for cooling that building. So a four-degree range of increasing the temperature can save about 20 percent on the energy costs. And that's huge."

In Japan, meanwhile, Hedge says the government is running a program which keeps the minimum temperature at 83 degrees in government buildings in the summer. Hedge says that measure saves over 80 million barrels of oil every year.