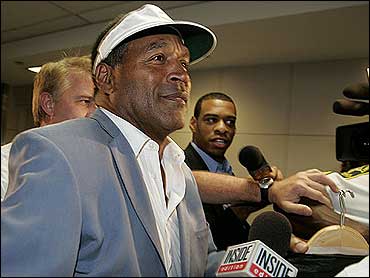 Standing in a casino hotel room, a fallen football hero played out the final scene of a sting operation to seize prized possessions from his glory days.

But his plan, plotted against the backdrop of a quickie Las Vegas wedding, was suddenly going bad.

There was a gunman impersonating a police officer. Men were screaming at each other. And the prized possessions were being stuffed into pillow cases and cardboard boxes.

In a city where casino heists and celebrity spawn images of Frank Sinatra's Rat Pack and George Clooney flicks, the caper allegedly orchestrated by O.J. Simpson has the glint of Sin City's seedy underside - with shadowy figures and deals gone bad.

Based on a review of police reports and interviews with Simpson, sports memorabilia dealer Alfred Beardsley, police investigators, prosecutors and other authorities involved in the case, the day unfolded in the following manner:

It began with a phone call, police and those involved say, from an auctioneer with a colorful past, an ex-con known for auctioning Anna Nicole Smith's diaries.

Thomas Riccio had helped arrange autograph signings for Simpson. And he knew Simpson believed a former associate had stolen many of his pro football belongings and personal items, such as family pictures and a suit Simpson wore the day he was acquitted of murdering his ex-wife, Nicole Brown Simpson, and her friend, Ronald Goldman.

Sports memorabilia dealers were peddling some of the items, Riccio told Simpson. He faxed a list of items and offered to help Simpson get them back.

The timing could not have been better: Simpson was headed to Vegas as best man at a friend's wedding.

Riccio called Beardsley, an ex-con who by his own account helped Simpson make money with autograph signings and simultaneously profited off his infamy.

Beardsley recalled Riccio telling him: "I have a client, a big O.J. Simpson fan, who wants to buy a lot of Simpson memorabilia." He had no idea it was Simpson.

Beardsley then, according to police, turned to Bruce Fromong, an expert in Simpson memorabilia who testified for Simpson at his wrongful death civil trial.

Fromong had sold Beardsley the so-called acquittal suit and Beardsley offered it to the Goldman family, which has been working for years to collect the $33.5 million wrongful death judgment. They passed on the offer.

Simpson rated little special attention when he arrived at the Palms on Sept. 12 with his longtime girlfriend, Christine Prody, a woman who bears a likeness to his slain ex-wife.

They checked into a $250-a-night, 550-square foot "King Jr." room in the Palms tower rather than the more upscale, Fantasy Tower. Compared to the $40,000-a-night Hugh Hefner Sky Villa, it was no-frills. He was no longer a hot celebrity like some other players at the hotel.

2Most of the wedding party was staying at the Palms, but one out-of-towner, Walter Alexander, was staying elsewhere. He and Simpson were mutual friends of the groom, Thomas Scotto, but had not talked in years, recounted Alexander's lawyer, Robert Rentzer, who once represented Rodney King.

Alexander, 46, and Simpson had once been golfing buddies, and had a unique link: Alexander's uncle was the godfather of a child from Simpson's first marriage, Aaren, who died as a baby in a swimming pool accident.

The two had a falling out after Simpson refused to help Alexander pay for his father's funeral several years ago.

"O.J. says something like, 'Everybody wants a piece of me,' and didn't offer him a dime to help throw the funeral," Rentzer said.

As Simpson tells it, he asked Alexander for help in a plan unfolding across town at a lower-end casino hotel.

While Simpson prepped at the Palms, Riccio waited in the lobby of the Palace Station, a one-time bingo hall, for Fromong and Beardsley to arrive.

The two men brought the Simpson memorabilia, along with other items - Joe Montana lithographs and Pete Rose autographed baseballs.

They shook hands, and headed to Fromong's car to take stock of the goods.

Footballs, baseballs, plaques, various documents and three ties that Simpson was said to have worn during his "Trial of the Century" were in the trunk, according to police arrest reports.

Riccio got a bellman to cart the items to a small ground-floor room he had reserved.

The memorabilia was laid out on the bed and around the room.

Beardsley snapped a few pictures of the display with his cell phone camera.

Then Riccio got a call. His client had arrived.

Simpson had a problem, he would later tell The Associated Press. He didn't have a car in Las Vegas, and would have to take a taxi to the Palace Station, a couple of miles away.

That meant he had no way to get the items back to his hotel. And with the room number Riccio had given him, 1203, which he mistakenly believed was on the 12th floor, he would need help carting out his belongings.

Alexander, as Simpson told The AP, agreed to put together a crew with a truck to help.

But when it came time to go, two of the men were running late, and they had to scramble to find others.

By the time they pulled into the parking lot at the Palace Station that evening, the crew of four - Simpson, Alexander and the two helpers - had grown to six when the two stragglers showed up.

It was more help than Simpson wanted or needed.

But he was there, and he wanted his stuff back.

Riccio was hit by questions: Are Fromong and Beardsley in the room? Do they have the goods? Does anybody in the room have a gun?

From here, the story becomes murky, depending who tells it.

But authorities say they know this: