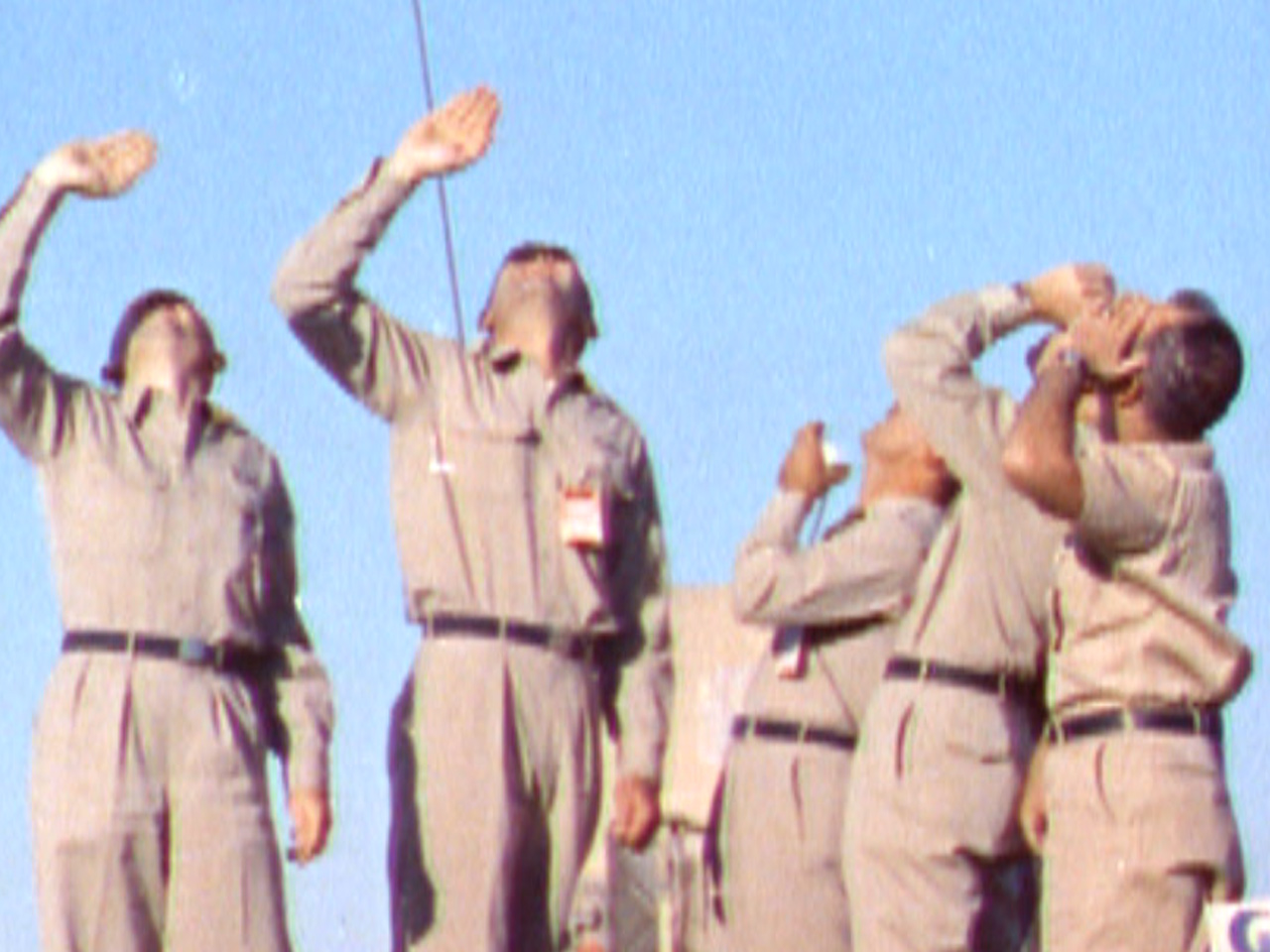 (CBS News) COLLEGE POINT, Md. - On this date in 1957, the U.S. conducted one of the most important tests of the atomic age.

A nuclear-tipped missile was fired and detonated in the skies over the Nevada desert.

But what was happening on the ground at that moment seems beyond comprehension today.

Five men voluntarily stood there as the weapon exploded 18,000 feet over their heads.

The test was the only one of its kind, and it was all captured on film, which is now held at the National Archives.

It was a little after sunrise when five officers of the U.S. Air Defense Command, wearing only their summer uniforms, took their positions next to a sign reading "Ground Zero, population 5."

They counted down the seconds as two Air Force F-89 jets swooped overhead, until one fired a nuclear-tipped air-to-air missile about one-eighth the size of the A-bomb that was dropped on Hiroshima.

There was a blinding flash as the 1.73 kiloton weapon detonated.

"We felt a heat pulse, a very bright light," one of the witnesses is heard saying on the film. "A fireball, it is red. The sky looks black about it. It is boiling above us."

Thirteen seconds later came the sound of the blast wave.

"It is tremendous -- directly above our heads!" the voice says. "It was a huge fireball. A perfect, perfect shot!"

There was a sixth man there that day - George Yoshitake, a civilian cameraman working with the Air Force. He wasn't told the test was directly overhead until he arrived.

"I remembered I had a baseball cap, and I thought, 'I'd better wear that, just in case,"' Yoshitake recalls.

Afterward, he found out that the film he was making was to be government propaganda.

"It was a publicity stunt to show the American public how safe it was during an atomic bomb," Yoshitake says, "and if there was a war or something, with atomic bombs going off, that it was going to be safe for the general public."

By the late '50s, Americans were fearful of nuclear attack.

Duck-and-cover drills - laughable today - were held to teach Americans how it was thought they could get some shelter.

Back then, the U.S. didn't yet have intercontinental ballistic missiles, so if Soviet bombers attacked, the missile fired in that test was America's only defense.

"That was basically to show that life can go on as normal with these nuclear air-to-air rockets exploding in the sky!" explains Peter Kuran, a filmmaker who's done documentaries on nuclear testing.

He researched the footage of the test with its human subjects and stitched it together.

He wasn't surprised at what he found.

"They wanted to show that this was really no big deal. And they did everything they could to say, 'Well, this is no big deal,"' Kuran says.

The five human guinea pigs didn't seem to think so, either.

"My only regrets right now are," a voice on the film says, "this is Col. Bruce - that everybody couldn't have been out here at Ground Zero with us. ... Folks, it was just a wonderful thrill."

"Yeah, we all had a good time," Yoshitake says. "They were very happy it went off. In fact, there was one guy who passed out cigars. I remember they were all smoking and slapping each other and shaking hands that they survived."

Officials measured radiation on the ground at the time and said it was negligible.

Yoshitake also filmed a lot of other nuclear testing in the '50s and '60s. He's still going strong at 83.

He says that, at the time, he "just thought it was another job; didn't give it too much thought. But then again, I was young."

Only one of other five men, Don Lutrel, is still alive. He's 88.

He told us that all six people who were there that day have had cancer, but there's no definite link to that day.

Yoshitake says he has no regrets about taking part in the test.

Still -- asked if he would do it now, he said, "I'm going to have think about that a little bit."

To see Bill Plante's report, inlcuding the film of the 1957 test, click on the video in the player above.