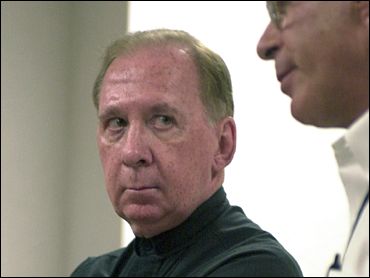 A judge told prospective jurors Monday in the hit-and-run trial of Roman Catholic Bishop Thomas O'Brien that they can be fair and impartial even if they have already heard a lot about the case.

The exception would be if the extensive media coverage had caused them to form an opinion they could not change, said Superior Court Judge Stephen Gerst, who last week denied a defense request to move the trial because of the coverage.

By the end of Monday, 80 out of 150 prospective jurors had been dismissed in a process that attorneys expect to take up to a week to choose 12 people. Both the prosecution and defense made five-minute presentations to the 70 remaining prospective jurors as O'Brien listened.

Prosecutor Tony Novitsky said the bishop had failed to "abide by the responsibility every driver has" after hitting a pedestrian with his car in June. He didn't stop and never tried to contact authorities about the fatal accident, Novitsky said.

O'Brien's attorney, Patrick McGroder, told the jury pool that the victim, Jim Reed, had been dressed in a black hat and shirt and "jaywalked and staggered into the street." McGroder said he would introduce evidence at the trial that Reed, 43, was drunk.

O'Brien led the Phoenix diocese's nearly 480,000 Catholics for more than 20 years but resigned after he was charged with leaving the scene of the accident.

The 68-year-old bishop told police he thought he had hit a dog or a cat or that someone had thrown a rock at his car.

If convicted, O'Brien's sentence could range from probation to nearly four years in prison.

The accident came during a troubled period for the Phoenix diocese. Two weeks before he resigned in mid-June, prosecutors announced that O'Brien had signed an immunity deal to spare him an indictment on obstruction charges for protecting priests accused of child molestation. As part of the deal, O'Brien agreed that he would no longer handle abuse claims.

The accident happened as O'Brien was headed home from a confirmation ceremony. It was dark when Reed crossed a street on his way to catch a bus about three miles from O'Brien's home.

According to police, Reed was struck by two cars as he crossed in the middle of the block. Police said it appeared that O'Brien's car hit first. Both cars drove off.

For the most part, the details surrounding the accident are undisputed. At the heart of the case is whether the bishop knew, or should have known, that he injured someone.

Prosecutors will likely point to the fact that the passenger's side of O'Brien's windshield was heavily damaged. Defense attorneys were expected to argue that O'Brien didn't know what he hit or realize that he hurt someone.