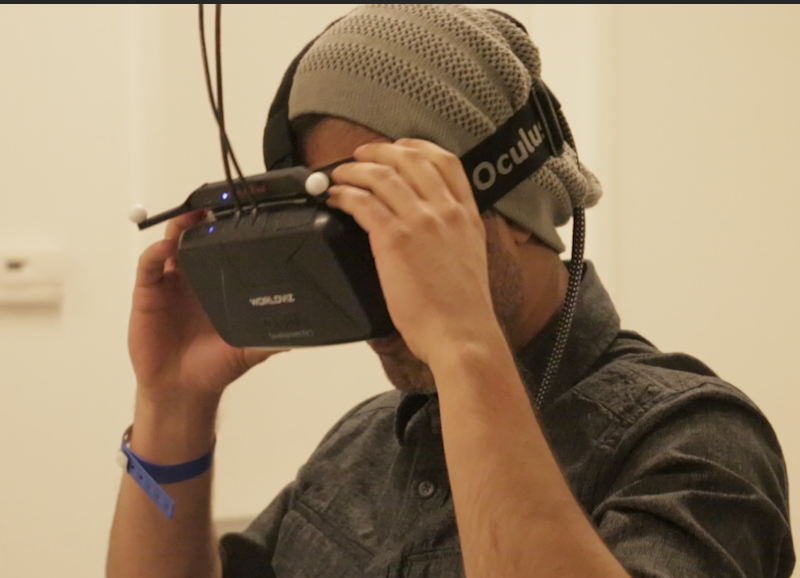 On a recent Spring morning at Stanford University, in a building tucked away in a peaceful alcove off the main quad, Shawnee Baughman was finishing up her customary tour of the Virtual Human Interaction Lab. One medium-sized room - empty, apart from a thick black cord suspended in the center that connects a large head-mount display, resembling a high-tech oversized pair of goggles- to the ceiling - comprises the heart of the lab. It's an unassuming space, especially for such a technologically advanced room. This is where virtual reality, or VR, has been developed and studied for more than a decade.

"There are particular features that make this room special for VR," said Baughman, who studied at the lab while she was a student at Stanford and became lab manager in 2014. "There are many things you need to enhance the virtual experience."

Virtual reality uses immersive technology to push the boundaries of people's emotional, physical, and intellectual capabilities. People feel present in a virtual environment, or world, in which there are no rules: gravity can be suspended, senses can be manipulated and avatars can be inhabited. Most of the lab's work is focused on VR's potential to enhance people's empathy, and the staff say the overall goal is to use VR to improve relationships in the real world.

"Virtual reality is an experience," said Jeremy Bailenson, the director of the Virtual Human Interaction Lab. "Your brain is saying to you 'This isn't real,' but the back of your brain says 'Wow, this feels real to me.'

"We like to say the brain is not yet evolved to know that a virtual experience is not real," he added, explaining how he has overseen the creation of dozens of virtual worlds by students and former students like Baughman since the lab opened in 2003. He's currently running studies on several VR scenarios, including one with superhero avatars that can fly, and an environmental one that transforms participants into a coral reef to more profoundly highlight impact of ocean acidification.

Bailenson's team uses cutting-edge technology to make the experience as real as possible for visitors and participants in lab studies.

"We currently use the DK2 Oculus Rift," said Baughman, pointing first to a wall in the lab on which the image from her laptop desktop was projected, and then to the head mount connected to the thick, black cord.

Oculus is a virtual reality gaming startup that developed the headset, resembling a large pair of goggles, used for VR. It was purchased by Facebook in 2014 for $2 billion. In May, the company website announced that it expects to release a consumer version of the Oculus Rift in early 2016.

"We're able to run more research now because we can take a setup with one of these ... and a computer, and take it out into the world instead of bringing everyone into the lab physically," Baughman said, holding up an Oculus headset.

Bailenson predicts that VR technology will be "in living rooms by the next holiday season," given the staggering drop in price of VR technology - from an average of $40,000 per Oculus headset a couple of years ago, to just $300 currently. However, though consumers likely will soon have the same technology at their disposal as Bailenson's staff at Stanford, the work of the lab is far from obsolete.

"Even though we have technology in the lab, we're not technologists but social scientists," said Bailenson. "That's what sets us apart."

Beyond playing entertaining tricks on people's perceptions, VR has the potential to promote a better understanding of what it's like to be someone else - a refugee in a war zone, for example. Studying the effects of those uses, and the psychological effects of VR use in general, has always been the main focus of the lab. Bailenson listed how several of his studies that focused on empathy - for example, making someone visually impaired through VR- yielded results that demonstrated the VR experience made participants more altruistic in real life.

"What's shifted is that now I study 'Let's imagine a world in which VR is used daily'," said Bailenson, outlining his plan to build applications that would enhance empathy and positively alter behavior. A few weeks later, he shared these ideas with crowds at the 2015 TriBeCa Film Festival in New York.

"Let's try to ... create positive experiences in reality. A very intense experience in the virtual world changes you in the real world," Bailenson told audience members during a talk at the festival's "Imagination Day." He invited people to try out the technology.

"One criticism of social science research, and my research, is that our subject pool tends to be college sophomores," said Bailenson. "What we're doing with this new project is we're building suitcase systems." He explained that it was the first time "an entertainment crowd" had the opportunity to experience the lab's VR work.

"The idea is, I truly believe VR is a good tool to teach you about yourself and to teach you empathy," said Bailenson. "We want to know how robust that effect is, how long-lasting, because I can see this becoming a tool we all use."

As dozens of TriBeCa festivalgoers sampled the technology - transforming into superheroes, flying or embodying pieces coral reef - back at Stanford, one of Bailenson's Ph.D students continued work on a new study that the lab recently launched in partnership with Sesame Street.

"We want to figure out how to make this technology an educational tool for kids," said Jakki Bailey, who is running the study. "There's very little research that looks specifically at immersive virtual reality and kids."

By opening up virtual reality studies to different participants across America, including children, Bailenson says that he hopes the lab can develop an understanding about what the power of VR can do:

"When I think about virtual reality, I think virtual reality is like uranium: It's this really powerful thing. It can heat homes and it can destroy nations. And it's all about how we use it."