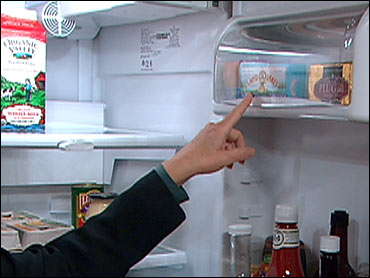 Have you ever looked in your refrigerator and wondered, "Has this food gone bad?"

Tips to help you know were offered on The Early Show Monday by Amanda Walker, Senior Editor of Consumer Reports' ShopSmart magazine. She outlined how to know which foods should stay and which should go.

Whether it's leftover chow mien, moldy Muenster, or an open jar of pasta sauce, foods' shelf lives vary once you open and store them in your refrigerator.

MILK: LASTS NO MORE THAN A WEEK AFTER THE SELL BY DATE

Keep milk in the back of the fridge, and toss it no more than a week after the sell-by date. This is one item where you can use the "smell test." Don't put milk on the refrigerator door. Save the door for items you want to be a bit warmer, such as butter. Bottled water and other unopened drinks are items that are less susceptible to temperature problems. Many condiments, such as pickles and olives, have highly acidic brines that slow bacterial growth, so you can keep them for a long time, until you see mold forming.

Mayo has a high fat content, which means it's not as susceptible to mold and bacteria growth. What does happen is that the oils in mayo break down over time, the flavors change, and it will no longer taste good. There may be a subtle "off" smell, but you may or may not be able to smell it, so be on the safe side and dispose of it after two months (this is for any container -- glass or squeeze bottle). For other condiments, such as ketchup, oil, and salad dressing, refer to the expiration dates, which are normally accurate for these products. Because it's so easy to lose track of how long your food has been living in the fridge, take tape and a marker and write down the date you open the item. Use that as your reference point.


For much more on this, from ShopSmart, click here.
PEANUT BUTTER: REFRIGERATE AFTER THREE MONTHS

BABY FOODS: LAST ONE-TO-THREE DAYS IN THE FRIDGE ONCE OPENED

An open jar of strained fruits and veggies lasts two-to-three days in the fridge. Opened cooked meat and vegetable combos need to go after a day or two. Meat and veggie combos should go after two days, tops. The bottom line is: Don't leave open jars of baby foods in the fridge longer than three days. Another hidden danger with baby food is that parents frequently may feed babies right out of the jar, and saliva transferred to the jar can promote bacterial growth when placed back in the fridge. If you're using a jar more than once, make sure you portion out what you're going to use, so the dirty spoon doesn't go back into the jar.

King Pao chicken, pepperoni pizza, or tuna salad must go in the fridge within two hours of serving to reduce your risk of food-borne illnesses, because bacteria grow more quickly at room temperature. Don't leave leftovers hanging out in the kitchen. Put them in the fridge as soon as you're done with them. Cold temperatures slow the rate of bacteria growth. Refrigerate larger items like macaroni salad or large quantities of Chinese food in several shallow containers, rather than large clumps. That way, the food will cool evenly and more quickly. You don't want a big clump: That means taking the chance of something growing in the center because it didn't cool properly.

Some Cereal Boxes Are Keepers