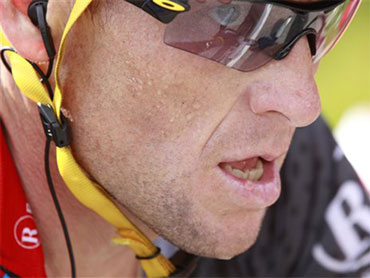 1. Let History Stand on its Own.

Lance Armstrong changed the course of American cycling more than any rider in the history of the sport. And while other riders from the USA, ranging from Davis Phinney and Greg LeMond to Eric Heiden and Jonathan Boyer, enjoy a secure place in the development of both recreational and professional cycling, it was Armstrong's success and permeation into the mainstream of American sports culture that altered the way we think and feel about weekend adults dressed in spandex. For us, or Lance to forget that, regardless of his performance in this year's Tour de France or the outcome of his forthcoming exchange as a result of drug use accusations, would be an unforgivable act of historical revisionism.

2. Work Even Harder to Beat the Cancer Bitch.

Lance is still more than alive while the Marlboro Man, an avid smoker, died of cancer. It would be naive to think that Armstrong's story had not provided the hope and courage for many others to beat the evil disease. His career as a pro is almost over. Cancer continues to kill.

3. Rise Above the Noise, Raise Up Cycling.

Recreational cycling is one of the fastest growing participatory sports in America. The sport needs its heroes, however failed and flawed, to set their differences aside and focus on showing the people the great joys and benefits that we discovered when we were kids. Note to Greg, Floyd, Lance, and their legal lieutenants: Enough already. Put the spokes back in your wheels.

Few are the examples of former greats who enjoyed their decline into the ranks of rank amateurs, laughing and joking at their own physical decline. Watch Armstrong race at the club level, putting on display his own humanity and the inherent message found on a millions yellow wristbands. And watch how a former champion connects with the human spirit that he relied on to save him from cancer.

5. Let the Drug Accusations Play Out.

If Lance cooperates fully with any pending investigation and then accepts their rulings, regardless of the due process and result, he cannot lose in the long term court of public opinion, if not his own soul. Even in the unlikely scenario Armstrong is found guilty of some misconduct, he can either let the accounting swallow his entire career or he can be Jonas and light the fire to see what good he can make of it. As Lance knows so very well, we pick our battles and there are much tougher ones than rule interpretation in some two-wheeled game. A failed hero lives to fight again. And he is all the wiser for when he loses.

6. Keep Building it and They Will Keep Coming.

As Lance leaves pro cycling, he cannot let his foundation, LIVESTRONG crash and burn. Twenty-eight million people are living with cancer. LIVESTRONG is perhaps the best example in history of connecting popular culture with an unpopular disease. The tools are in place to build the non-profit foundation into one of the most powerful tools ever in mainstream medical education and research. Whatever Nike is coughing up to support it doesn't match the frothy blood of the diseased victims. Add a few zeros, Phil. That dog will hunt and there are some sick people who are hungry for results.

7. Go Back to Your Triathlon Roots.

The 15-year-old kid from Plano, Texas began his sporting career in triathlon. Few realize just how good of a swimmer and runner Lance was, and can be again. If Lance can manage a top ten finish at the Ironman Triathlon World Championship in Hawaii, he completes the fairy tale with an indelible stamp on the world of endurance sports. Just by posting up to the starting line, everyone wins, none more than the kid coming home.

8. Stop Trying to Win Everything...Just the Ones that Count.

Few would argue that Armstrong's rabid control, attention to detail, and burning desire to win have enabled his career if not his own cancer survival. But perhaps in the next 40 years of his life, the 38-year-old can let his guard down, let his alter ego, Mellow Johnny, take more of a role than the players in his past who stoked the fires where his brash sword was forged. Only Lance will know where to unleash the dogs of winter and where to stand down and breathe.

I want another book, a brutally honest 1000 page tome written by Lance and Lance alone. I'll wait 10 years, maybe 20 if that's what it takes. And Lance wins every time he finishes a thought, a paragraph, a way to share what must be 1001 ideas on what winning is. And what it is not.

10. Raise them Kids, and Raise Them Well.

What place public herodom if daddy has gone to slay another dragon? I believe that Lance Armstrong knows this. I say this to remind myself and others. Cards in the spokes for everyone.