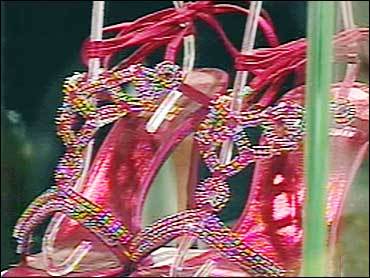 The Early Show co-anchor Julie Chen, who loves shoes, asked Angela Botlph, style editor of InStyle magazine, about the jewel-encrusted footwear for the woman who has everything.

The red stiletto sandals have been designed using platinum thread and are set with 642 round and oval rubies, totaling more than 120 carats. The heels are four and a half inches high. Botolph says they were not created to be on display in a box in someone's house.

"It's an item for wearing," she says. "But they could jazz up any outfit. If you're in Gap jeans and a Gap T-shirt you could put the finishing touch." What's also nice, she says, is that can take off the stones and "turn them into a bit of jewelry."

The designer, Stuart Weitzman, was inspired by "the most famous shoe ever made" - Dorothy's ruby slippers from "The Wizard of Oz."

A dainty size three-and-a-half, (American size four) the shoes are displayed in a bullet-proof case surrounded by round-the-clock security in Harrods' shoe department in the Knightsbridge store.

It has been agreed that £100,000 from the sale will be donated to children's charities in the UK.

Originally designed for the Red Carpet on Oscar Night, Stuart Weitzman chose to pull the shoes from this event out of respect for the mood of the country.

If the shoes do not find a buyer by May 15, they will go on display in a New York store.