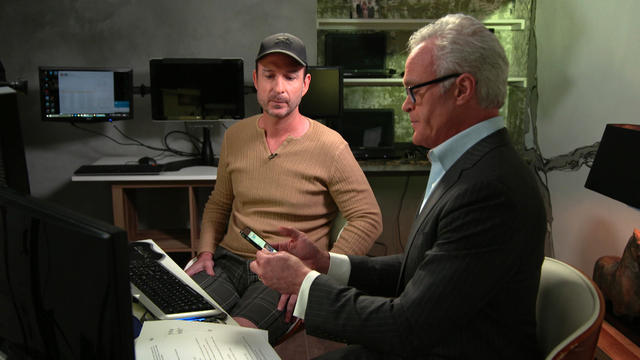 The following is a script from “Fake News,” which aired on March 26, 2017. Scott Pelley is the correspondent. Michael Radutzky, Guy Campanile and Andrew Bast, producers.

In this last election, the nation was assaulted by imposters masquerading as reporters. They poisoned the conversation with lies on the left and on the right. Many did it to influence the outcome, others, just to make a buck. The president uses the term “fake news” to discredit responsible reporting that he doesn’t like, but we’re going to show you how con-artists insert truly fake news into the national conversation with fraudulent software that scams your social media account. The stories are fake, but the consequences are real.

This past December, Edgar Welch opened fire in a Washington D.C. pizzeria. He told police he was there to rescue children forced into prostitution by Hillary Clinton. The story of Secretary Clinton’s child sex-trafficking operation, in a pizzeria, was invented before the election by fraudulent news sites and shared by millions. James Alefantis owns the restaurant.

“It went from a few people buzzing about something online or inside of chat rooms that we never would have seen before, to suddenly being blasted to millions and millions of people.”

James Alefantis: It started on November 4, 2016, where I started to get strange messages directly into Instagram and to Facebook. And these direct messages were saying all kinds of very strange and bizarre things.

James Alefantis: Many of the threats, death threats, I think were some of the worst. People saying that they wanted to see my guts cut out and spill on the floor of my restaurant. One person said that they prayed that someone would come and kill everyone inside. And it was terrifying moments.

Edgar Welch fired into the only locked door in the restaurant and found, much to his surprise, no sex slaves. No one was hurt unless you count Alefantis, an innocent bystander at a character assassination.

James Alefantis: It went from a few people buzzing about something online or inside of chat rooms that we never would have seen before, to suddenly being blasted to millions and millions of people.

The police say there is no sex-trafficking conspiracy. But millions read about it on dozens of websites including one called “Danger and Play,” which wrote, “Clinton’s inner circle includes child traffickers, pedophiles and now members of a sex cult.” “Danger and Play” is written by Michael Cernovich, a Southern California lawyer who describes himself as “right-of-center politically,” but who has become a magnet for readers with a taste for stories with no basis in fact.

Michael Cernovich: They’re not lies at all. 100-percent true.

Scott Pelley: Do you believe that, or do you say that because it’s important for marketing your website?

Michael Cernovich: Oh, I believe it. I don’t say anything that I don’t believe.

Scott Pelley: That doesn’t seem like a very high bar.

Michael Cernovich: It’s a high bar because I’m an attorney. I know how to weigh and measure evidence.

Michael Cernovich: Here’s the story of my life.

Michael Cernovich: That was a slow month, too. We hit 150 million sometimes. What I’m doing is, it’s punchy, it’s fun, it’s counterintuitive, it’s counter-narrative, and it’s information that you’re not gonna see everywhere else.

In August, he published this headline.

That story was sourced to an anesthesiologist who never met Clinton. It got so much traction it had to be denied by Clinton’s doctor and the National Parkinson Foundation.

Michael Cernovich: She had a seizure and froze up walking into her motorcade that day.

Scott Pelley: Well, she had pneumonia. I mean--

Michael Cernovich: How do you know? Who told you that?

Scott Pelley: Well, the campaign told us that.

Michael Cernovich: Why would you trust the campaign?

Scott Pelley: The point is you didn’t talk to anybody who’d ever examined Hillary Clinton.

Michael Cernovich: I don’t take anything Hillary Clinton is gonna say at all as true. I’m not gonna take her on her word. The media says we’re not gonna take Donald Trump on his word. And that’s why we are in these different universes.

Cernovich’s website is just one of hundreds publishing nonsense on the right and on the left. We were curious how a particular fake news article breaks out from one website and becomes a popular trending topic on Facebook or Twitter, for example. And we discovered one of the reasons is fraud. Some fake news publishers use computer software called “bots” to make their articles appear much more popular than they actually are. Bots are fake social media accounts that are programmed to automatically ‘like’ or retweet a particular message. Jim Vidmar knows all about bots, he’s a consultant who helps products or people get noticed on the Internet.

Scott Pelley: So when we’re talking about these bots, these are Twitter accounts masquerading as real people.

Scott Pelley: By the thousands?

Jim Vidmar: By the millions.

We did an experiment with Vidmar’s help. We bought 5,000 bots from a Russian website—they cost us just a few hundred bucks.

Scott Pelley: We’ve set up an experiment so you can show me how this works. And I’m going to tweet from my account, “What happens when 60 Minutes investigates fake news?” So tweet that out.

Scott Pelley: Hit it with everything you’ve got.

Jim Vidmar: Let’s hit it with everything we got.

Jim Vidmar: There you go. Now you’ve got 3.2 thousand retweets right there.

Jim Vidmar: Now real people start seeing it. They start retweeting it, and, you know, responding to it.

Scott Pelley: And it takes off.

Jim Vidmar: And it takes off.

That matters because Facebook and Twitter select articles to present prominently based mostly on how popular they are. They can be fooled by bots. Our imposters expanded the reach of our message 9,000 percent. But our tweet didn’t catch fire the way so much fake news does because our message was not salacious.

Jestin Coler: You need to talk in their language about very specific words that kind of get that emotional response. That’s really the key to it all. The key to all of the fake news.

Jestin Coler says a fake news headline has to make blood boil.  He’s not afraid to admit that he made real money on fake news. He’s known for two fake news sites -- one called the “National Report,” the other -- “Denver Guardian” where he pushed people’s buttons on issues such as abortion and Obamacare.

Jestin Coler: We did a piece on RFID chips being mandated through the Obamacare exchange.

Scott Pelley: And what are those?

“It’s kind of almost an addiction, right? You kinda see something really take off, and then as it’s coming down you’re kinda lookin’ for that next high, I guess.”

That story was read 1.6 million times. Coler wrote another fake story about an FBI agent investigating Clinton emails, who was killed in a murder-suicide. And then there was a fake army quarantine of a Texas town infected with Ebola got 8 million page views.

Jestin Coler: It’s kind of almost an addiction, right? You kinda see something really take off, and then as it’s coming down you’re kinda lookin’ for that next high, I guess.

His highs were profitable. With each click, he made money on ads—over $10,000 a month he told us, writing fiction posing as fact.

Jestin Coler: Facebook really was key to what we did.

Jestin Coler: Well, we would basically join whatever group it is that you’re trying to target on Facebook and once they kind of took the bait so to speak they would spread this stuff around, they would be the ones that would essentially be our bots.

Scott Pelley: What did you discover about the audience?

Jestin Coler: You know, people in general are quick to believe anything that is-- not anything, but-- well, yeah, basically anything that’s put in front of ‘em in a format that is news-ish.

Scott Pelley: Did the environment in this world change during the presidential election?

Jestin Coler: It did. Sure. A lot more players joined the game

Phil Howard: Part of political campaigning these days involves a very widespread strategy that involved manipulating public opinion over social media. Twitter and Facebook are part of the advertising strategy.

Phil Howard leads the Internet Institute at the University of Oxford which examines misinformation on social media. They’ve analyzed web traffic in the days before the election in the swing state of Michigan.

Scott Pelley: How much of this news on Twitter in Michigan was, as you call it, junk news and how much of it legitimate?

Phil Howard: Well, in the case of Michigan, we found that the proportions were about equal. The junk news with stories that had not been fact-checked and that came from organizations that were not professional journalism organizations, was about as much as the amount of content coming from the professional news organizations.

Scott Pelley: There was as much fake news as there was actual news?

Phil Howard: There was.

To get an idea of who reads fake news we turned to the Trade Desk. The Internet advertising firm that helps companies steer clear of fraudulent sites. Jeff Green is the CEO.

Jeff Green: So the first thing that we found out is that it is definitely a phenomenon that affects both sides.

Jeff Green: There is no question they’re both affected.

One fake story, Green examined claimed that the Congress was plotting to overthrow President Trump. He was surprised to learn that right-leaning fake news overwhelmingly attracted readers in their 40s and 50s. And he also found fake-news readers on the left were more likely to be affluent and college-educated.

Jeff Green: That shocked me.

Jeff Green: I think I thought the same way that many Americans perhaps think is that fake news was a phenomenon that only tricked the uneducated. Not true. Just not. The data shows it’s just not true.

Jeff Green: What is most concerning is the amount of influence that they seem to have because the people that spend time in those echo chambers are the ones that vote.

After the election, Facebook and Twitter recognized the threat to their credibility and changed their programs to make it harder for fakes to proliferate. Both companies declined to be interviewed.

Michael Cernovich: And we’re back.

Michael Cernovich, whose articles included the fake Hillary Clinton pedophile ring and her bogus diagnosis of Parkinson’s, is watching his audience grow.

Michael Cernovich: I’m a skeptical person. And I know that there’s a lotta people gunnin’ for me. So I’m not gonna be reckless.

Scott Pelley: Who’s gunning for you?

Michael Cernovich: You are! I’m on 60 Minutes! Right?

Scott Pelley: What do you mean we’re gunning for you?

Michael Cernovich: Do I really think that you guys are gonna tell the story that I would like to have told? No. Your story’s gonna be, “Here’s a guy, spreads fake news, uses social media and these social media people better,” I know the story you guys are doing before you do it.

Michael Cernovich: Because it is an agenda. Another story is, “Here is a person who is able to bypass traditional media outlets, reach people directly, to tell a story. Maybe he’s a good guy, maybe he’s not. I’m not going to serve as a mouthpiece for anybody.”