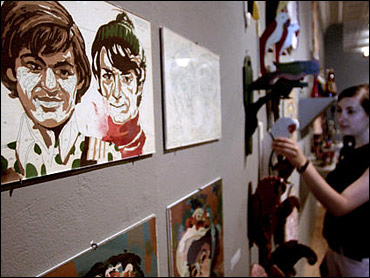 Long before Elvis's face first hit black velvet, the guardians of all that is good and serious in American art had something else to bewail. This heresy was called paint-by-numbers, and Dan Robbins was its prophet.

Robbins created the first paint-by-numbers pictures in the late 1940s, then rode the craze through the boom years of the 1950s and the bust of the 1960s.

He was once embarrassed explaining what he did for a living when he met his old art teacher on the street, but Robbins can now look back on the paint-by-numbers phenomenon with pride.

The once-mocked paintings are a hot collectible on eBay, and Robbins, now 79, had the satisfaction of seeing his artworks — completed by others — hanging in the Smithsonian in Washington in 2001 and 2002. He even wrote a book on his creations, "Whatever Happened to Paint-by-Numbers."

So it was with a mixture of vanity and self-deprecating humor that Robbins addressed an audience last week at Intuit: The Center for Intuitive and Outsider Art. One exhibition at the small but influential Chicago gallery, "Outside the Lines: Ordinary Pastimes, Extraordinary Art," celebrates hobbyist art, including paint-by-numbers oils.

Robbins said he had suspicions his artistic career was going to be odd when he first met his eventual employer, Max Klein of now-defunct Palmer Paint Inc. in Detroit. Robbins was several years out of service in World War II, newly married and unemployed when he signed on with Klein to create a children's watercolor set. As they left the building, he noticed a sign on the wall reading "Plant No. 7," and he asked Klein where the other six plants were.

"I look to the future," said Klein, who had no other plants.

Klein eventually got his seven buildings — and an eighth — thanks to what the men concocted two years later, in 1949, inspired by Leonardo de Vinci.

The children's paint sets were selling reasonably well when Klein, noting the increasing leisure time of postwar America, asked Robbins to come up with a way to market the company's paint to adults.

"I remembered hearing that Leonardo used numbered background patterns for his students and apprentices, and I decided to try something like that," Robbins said.

When Klein asked to see a prototype, Robbins said he "stirred together some Picasso, some Bracque and some Robbins" to create "Abstract No. 1," a vaguely Cubist still life.

"I hate it," Klein said. "Abstracts are for people who call themselves artists, but can't paint worth a damn."

But Klein liked the paint-by-numbers concept and gave Robbins the green light, as long as he could create subjects people "would actually like to paint."

"I did the first 30 or 35 subjects myself, then I started farming them out to other artists," Robbins said.

The Craft Master paint-by-numbers kit was born. In the early days, each $2.50 kit contained three pieces of real canvas, printed with lines and numbers, two brushes, a palette, and 20 or so capsules of paint.

Robbins said the first kits used gelatin capsules from a pharmaceutical house to hold the paint, which was pumped into them with an automatic device Klein rigged up from an old grease gun.

Sales were poor at first, but Klein put his faith in an innovative pitch at a 1950 toy show in New York, a single consignment shipment to Macy's and some creative word-of-mouth.

"By the time we got back to Detroit, all we could do was hang on for dear life," Robbins said.

"A beautiful painting the first time you try," trumpeted the ads. "Every man a Rembrandt!"

Craft Master was soon sending out 64-page catalogs. It was producing 50,000 sets a day by 1953 and selling a million a month. Celebrities got hooked on the kits and provided priceless free publicity. Members of President Dwight Eisenhower's administration showed their paint-by-number creations.

Craft Master chose broadcaster Arthur Godfrey, who was recuperating from hip surgery, as the first recipient of its first demure nude kit, which came with a manufacturer's warning: "You can enjoy this in the privacy of your own home."

Craft Master's paint-by-numbers sales peaked at 20 million kits in 1955, and its imitators sold even more. The competition's use of cheaper printed cardboard forced Craft Master to phase out canvas, but the market was already showing signs of saturation.

The fall was just as steep as the rise, Robbins said. By 1957, Craft Master's sales had fallen to 1.5 million, and Klein was forced to sell out.

In retirement, Robbins has found a second career as an expert on his own creation. And just to bring things full circle, he recently finished a painting titled "Abstract No. 2."