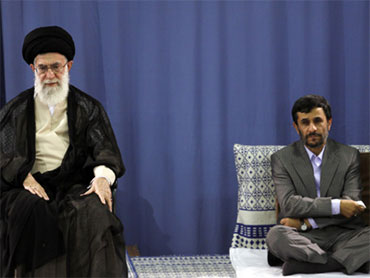 To confront Iran, the United States must first confront Europe--and more specifically, the continent's powerful business lobby. This confrontation will come into focus in the next months. As Iran refuses Barack Obama's open-handed offer of engagement, the administration will turn towards sanctioning the Islamic Republic. And while there are surely ways in which the United States can tighten the economic screws on the Mullahs, it is Europe that has a much livelier trading relationship with Iran. In fact, Iran is far more economically dependent on Europe than even China and Russia.

Last year, the European Union did 14.1 billion euro worth of trade with Iran. It imports nearly four percent of its energy from Iran--a number that will mushroom thanks to the presence of companies like Royal Dutch Shell, France's Total, and Norway's Hydro-Statoil, all of whom presumably appreciate the extent of the country's vast oil and gas reserves.

Since the fraudulent re-election of Mahmoud Ahmadinejad, Europeans have waxed outraged over the thuggishness of the basij and the imprisonment of dissidents. But all that indignation is highly unlikely to spur the Europeans to use their trade relations as a bludgeon against the Iranians. There's a long history of Europe subjugating its concern about Iranian human rights abuses--and no better example than Germany, Iran's largest trading partner in Europe.

The Iranians have something of a fetish for German engineering. German trade with Iran totaled roughly 4 billion euro in 2008. According to Michael Tockuss, the former president of the German-Iranian Chamber of Commerce in Tehran, "Some two-thirds of Iranian industry relies on German engineering products." If anything, trade between Germany and Iran has been booming. In the past six months, the petrochemical company Basell Polyolefine signed an 825 million euro contract to supply the technology to build three new plants in Iran. And the Bavarian energy company Bayerngas signed a joint venture agreement with the National Iranian Gas Company to build refineries, supply equipment, and develop a network of gas stations.

And it's not just commercial concerns that crave German tech. The government does, too. Last year it bought technology off Siemens and Nokia of Finland that allows it to better monitor and stifle the Internet, as well as mobile phone communications. The Siemens-designed "monitoring centers" track phone conversations and gather information on callers--tools that have come in handy the past few months, as organizers of the protest movement can well testify.

Germany is a curious case. On the one hand, it makes a big deal about its "special relationship" with Israel. Speaking before the Knesset last year, Chancellor Angela Merkel declared Israel's security integral to Germany's own security. And she has stressed her willingness to put both the political and economy squeeze on Iran.

Yet, members of her own government have been busy cutting deals with the Iranians. Hartmut Schauerte, an undersecretary in the Economics Ministry, improperly peddled his influence to accelerate approval of a 100 million euro plus deal for an engineering company in his electoral district (Steiner-Prematechnik-Gastec) to build three plants in Iran for compressed natural gas production. And Merkel took no concrete efforts to block the deal, which helps a gas-starved Iran to liquefy petroleum.

The German government believes that all this trade will ultimately transform Iran. "Change through trade" is an obsessive mantra of a broad swath of the country's business and political elite. And it's part of a broader strategy of engagement that is often described as "critical dialogue," the notion that the Iranians can be swayed into a moderate stance. Unfortunately, there hasn't been much criticism of Iran leveled as part of this dialogue.

Across the political spectrum in Germany, the major parties are basically unified in their opposition to tougher sanctions. The parties are simply not thinking about matters of security. Rather, they are consumed with upcoming elections and the preservation of German jobs that depend on trade with Iran. The parties frequently invoke the argument that sanctions are ineffective, while ignoring all evidence that the regime has been bleating about the relatively mild beating their institutions are experiencing thanks to the current spate of sanctions.

There's also an undercurrent of anti-Americanism that has shaped Germany's Iran policy. Ruprecht Polenz, the top Christian Democrat on the Bundestag's Foreign Affairs Committee, has defended German trade with Iran by evoking the presence of Coca Cola and Pepsi in Iran.

Sanctions are a controversial tool of foreign policy. There are plenty of people who question their efficacy. But the Iranian case may be closer to the South African apartheid regime than any other example. The Iranian regime obviously has extensive ties to the global economy. And the opposition to the regime has grown as it has acquired pariah status--a status that aggressive sanctions would reaffirm. Elites have begun to turn against the regime--and if sanctions further wound the national economy, not to mention their own bank accounts, they might be driven to rebel against the Supreme Leader and his perilous pursuit of nuclear weapons. But, of course, none of this will work if Europe goes about business as usual.

By Benjamin Weinthal:
Reprinted with permission from The New Republic.