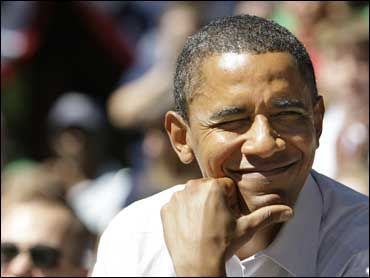 
Conventions have many functions, but typically, they attempt to firm up voters' images of the nominees, highlighting one nominee's strengths and pointing out the weaknesses of the other. At the same time, they attempt to insulate their nominee from the other party's attacks.

Polls allow us to categorize those feelings about candidates' personal attributes and qualities. Usually, different candidates do well in different categories - and that's certainly the case this year.

First, we can ask about a candidate's résumé. Does a candidate have enough experience, or the right kind of experience? Does he know enough? Can he become an effective commander-in-chief? That last question became particularly important earlier this year, when we also were asking about "she." There was an underlying question about whether a woman could effectively lead a male-dominated military. Hillary Clinton passed that test last spring in CBS News Polls; but now the question serves to differentiate Barack Obama from John McCain. In the most recent CBS News/New York Times Poll, twice as many voters (44 percent) say it is very likely McCain will be an effective Commander-in-Chief than say that about Obama (21 percent). Obama does a little better by comparison when those who say that is somewhat likely, though McCain's 80 percent still dwarfs Obama's 58 percent.

As for experience, we are finding another dramatic difference. Two in three (68 percent) say McCain has prepared himself well enough for the job - something fewer than half of voters (44 percent) say about Obama.

Next, we have the empathy question: Does a candidate care about you? Democrats usually do better than Republicans on this and that's what we've found again this year. Voters are more likely to say Obama cares a lot about their personal needs and problems (37 percent to 23 percent for McCain), although the margin narrows when those who believe each candidate cares at least somewhat about them (71 percent to 65 percent).

Next comes the question of whether the voters can identify with a candidate. Is he a "regular guy" or is he the opposite: is he "arrogant" or an "elitist"? Those words were tossed around about Obama by some commentators after his comments at a San Francisco fundraiser. The surprise in our surveys is that voters think Obama may be more like them - a man they could relate to (55 percent to 41 percent).

Someone might be a regular guy, but is he a good guy? Here's where we look at questions about values and morality. More voters see Obama than see McCain as having strong religious beliefs, although neither candidate is thought of a strongly religious by a majority of voters. Just 45 percent say Obama has strong religious beliefs, and only 35 percent say that about McCain. However, majorities - 63 percent for each candidate -- agree that both Obama and McCain share the values most Americans try to live by.

Then there is personal impact. Will a candidate - if elected -- make decisions that matter to you? And will your life change as a result of his election? Most of the time people don't expect a president to change their lives very much. In January 2001, just before the Inauguration, only 15 percent of those interviewed in a CBS News Poll thought George W. Bush had a great deal of power to affect their daily lives. But that impression may change when times are tough economically, as they are now. At the beginning of 1981, inflation was in double digits and unemployment was high. And when CBS News asked that same question about Ronald Reagan on the eve of his inauguration, 24 percent said he would have a great deal of power to affect their daily lives. In both years, about half said the incoming President would have "some" power to affect their lives.

This year, the economy is the overwhelming issue: eight in ten Americans say it's in bad condition and two-thirds feel it's getting worse. It's possible that voters this year will be more likely to assess the candidates in terms of what the election could mean financially to them and to their families.

So finally, with no incumbent running for re-election, the big question may be whether either candidate is worth the risk of voting for him. And that's what the rest of the campaign probably will be about. Barack Obama certainly chose Joe Biden to be his vice president in part to shore up one perceived weakness by adding Biden's foreign policy experience, and his decades in Washington - vicariously - to Obama's shorter résumé. Recent polls suggest that -- when it comes to what the voters think of him in other contexts - Obama's resume may be long enough.