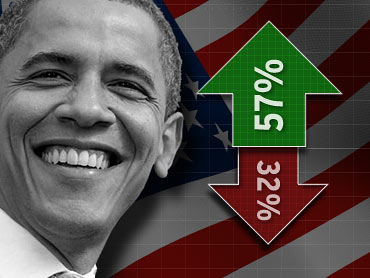 (CBS)
Today marks six months since Barack Obama was sworn in as the 44th President of the United States and according to the latest CBS News Poll, conducted July 9-12, 2009, his overall approval rating stands at 57 percent - his first approval rating below 60 percent and his lowest since becoming president.

How does this compare to past presidents?

At 57 percent, President Obama's approval is slightly higher than that of his immediate predecessor, George W. Bush (53 percent) and 18 points higher than the last Democratic president, Bill Clinton (39 percent) at similar points in their presidencies.

His approval rating is similar to that of President Ronald Reagan (59 percent), whose early months in office were also plagued by the nation's economic troubles. (It should be noted, however, that the unsuccessful assassination attempt made on President Reagan's life just 69 days into his presidency may have had an impact on his rating.) President Richard Nixon received a similar approval rating six months into office as well.

What does the six month approval rating tells us about a president's future success? Well, it's a mixed bag.

President Bush 41 and President Carter started out strong, but the nation's economic problems (and foreign policy issues in Mr. Carter's case) eventually took a toll on their approval ratings (a low of 31 percent for Mr. Bush and 26 percent for Mr. Carter). Neither were re-elected to a second term.

Richard Nixon was re-elected, but the Watergate scandal forced him to resign from office. Upon leaving office, just 24 percent of Americans approved of the job he was doing, according to a Gallup Poll. At one point his rating reached 67 percent.

An improved economy and a tough stance against the Soviet Union propelled Ronald Reagan to a second term. His highest approval rating in a CBS News Poll was 67 percent.

As for President Clinton, many were critical of his priorities early, but the economy rebounded and he was re-elected. He would eventually be impeached by Congress but not removed from office. He reached his highest approval rating of 73 percent multiple times, including after the vote by the U.S. Senate NOT to convict him of perjury and obstruction of justice charges.

In November 2008, just before the election of Barack Obama, only 20 percent of Americans approved of the job he was doing as president – the lowest rating of any President. Mr. Bush has the distinction of having the highest approval rating for a president as well as the lowest.

Recent history indicates that the condition of the economy has been key to the success and failure of many presidents, but unforeseen events like scandal or war, can also impact views of a presidency.