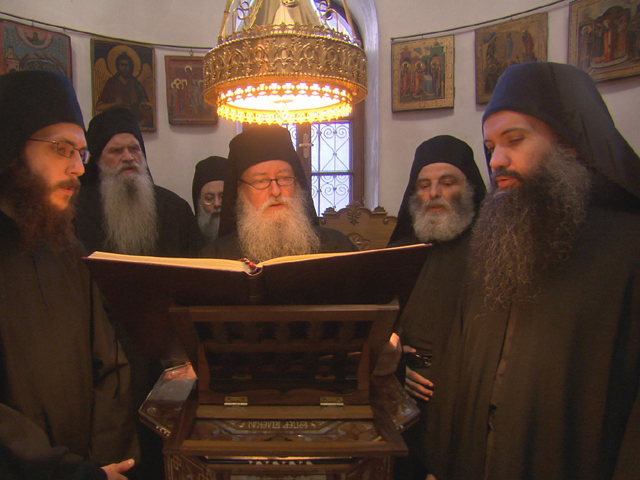 (CBS) If you want to live a long healthy life, you could do worse than joining the monks atop Mount Athos in Greece.

On Easter Sunday, "60 Minutes" profiled many of the Orthodox monks that have dedicated their lives to following the words and deeds of Christ. It's a job they take seriously. Prayers have been offered at Mount Athos every day, with no interruption, for more than a thousand years.

"The monks here have one goal, and that is how they can get closer to God," Father Serapion told "60 Minutes" correspondent Bob Simon.

But the monks have also benefited in an unexpected way - they live long lives with shockingly low levels of cancer and heart disease. Alzheimer's is virtually unheard of.

Is it the holy water?

Actually, say scientists, it might be what they are eating, rather than drinking.

"What seems to be the key is a diet that alternates between olive oil and non olive oil days, and plenty of plant proteins", Haris Aidonopoulos, a urologist at the University of Thessaloniki, told The Independent in 2007. "It's not only what we call the Mediterranean diet, but also eating the old-fashioned way. Simple meals at regular intervals are very important."

Before you go running out to buy the Mount Athos diet book (there isn't one), you might want to consider their meal plan.

"They eat two meals a day. The 'first meal' lasts 10 minutes; the 'second meal' also lasts 10 minutes," Simon reported. "There's no meat and no dinner table conversation - the only sound is a monk reading from sacred texts."

Still, the results seem impressive. The health of 1,500 monks was studied between 1994 and 2007. None had developed lung or bowel cancer. Only 11 had prostate cancer, a fraction of the international rate, according to the The Independent.

The benefits associated with the Mediterranean diet - lower rates of cancer, heart disease, Parkinson's and Alzheimer's - have long been touted. And it's not that hard to follow. Eat mostly fruits and vegetables, use herbs instead of salt, replace red meat with fish and lean poultry, and ditch the butter for olive oil. Also, be sure to throw in a few glasses of red wine. And, perhaps most importantly, get plenty of exercise.

The monks on Mount Athos don't have any treadmills, but you won't catch them sitting on the couch watching TV either. They don't actually have any televisions, or radios or newspapers for that matter. What they do have, is plenty of manual labor: picking fruit from the gardens, clearing brush and hauling building materials through the mountains via mules.

It's not an easy life - the monks don't have wives or children. In fact, women aren't allowed on the property at all. And the monks rarely leave, not even for the funerals of their closest loved ones.

When asked if he regretted not seeing his father one more time before he died, Father Iakovos told Simon, "Not at all... I know that we're gonna see each other in paradise one day."