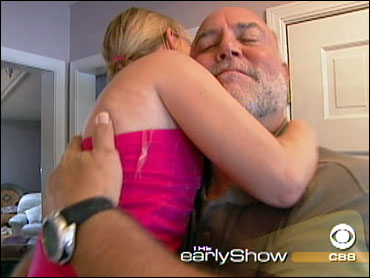 Children often get caught up in their parents' divorce battles, forced to take sides. As Tracy Smith reports, "parental alienation" can take a serious toll on kids.

Experts tell Smith that a child easily picks up the hostile cues of one parent toward another. And whether those cues are subtle or intentional, either way the child suffers and can carry that burden into adulthood.

One girl who loved both parents very much but got caught in divorce crossfire is Victoria Peters.

Her parents also loved her — so much that they spent hundreds of thousands of dollars and five years battling in court to win custody.

Franny Carney, Victoria's mom, says, "It's hell. It's like living in hell."

It was not an ordinary custody case.

Victoria's father claims that for years, while his ex-wife had full custody, she led a campaign to turn his daughter against him, what some experts refer to as "parental alienation."

"It's easy to teach a child to hate. Courts are now recognizing this is a serious problem," explains author Richard Warshak. "The children's affections are being poisoned against the other parent."

Kevin says the alienation campaign began with last-minute changes to his scheduled visits with Victoria.

"It was always an excuse that, on my weekend, there was some reason she couldn't come," Kevin says.

But Franny says she did not deny him visits.

"My daughter was locked in a closet when I called," Kevin tells Smith. Her mother would say, 'Lets go get in the closet. It's your dad.' "

Months went by. Kevin lost his temper. The police were called. His visits then had to be supervised. But even then, he says, his ex-wife continued to prevent him from seeing Victoria.

Franny contends that Kevin, who suffers from chronic depression, was emotionally unstable.

"I was frightened of him, ya know? When he was out of line, me and my daughter hid in the back of the bathroom," Franny says.

As charges mounted against Kevin, a court-appointed evaluator had to decide: Were these charges real or was there a concerted effort by Franny to turn Victoria against her father?

"Parental alienation is one of the common dynamics that occurs in high-conflict cases," says Daniel Stockley, a parental evaluator.

"The mother had difficulty, in this case, of letting go of, almost like an obsessive thought, that the child was at risk," says Stockley.

But sometimes children are forced to take sides.

"I couldn't love my mom and my dad at the same time. I felt bad," says Michelle Martin, an adult child of divorce. Michelle says she was alienated from her father as a child.

"It shocked me how quickly and dramatically I changed my opinion of him. I would have nothing to do with him," she recalls.

According to experts, Michelle's case is typical because, when pressed, she couldn't tell anyone why she was so angry.

"He hadn't done anything to hurt me. And so, when I was asked for details, I didn't have them," she says. "I still, to this day, have to live with the mean things I said to him. The letters that I wrote to him. There are things I did purposely to hurt him."

Victoria, who was caught in a similar crossfire, had been in therapy since she was 3, frequently accompanied by her mother. It wasn't until the therapist's notes were finally subpoenaed that a disturbing pattern emerged that turned Kevin's case around.

"The telltale one is 'My mom says there's a side of my dad that I've never seen before, real mean.' And the therapist says, 'Have you ever seen that side?' 'No.' 'Do you believe it's there?' 'Yeah, I always believe my mom,' " says Kevin's attorney, Robert Fry.

"The evidence was overwhelming that the relationship with the father was beginning to suffer," says Stockley.

In April 2005, in a startling decision, the court found that "an immediate change of custody appears to be in the best interest of the child" and Kevin was awarded full custody of Victoria.

"I was excited and stunned a little bit at the same time," Kevin remembers.

Ironically, it is Franny Carney, who now, because of what the court saw as alienating behavior, cannot see her daughter without a supervisor.

"I raised her for seven and a half years. I was involved in every area of her life," Franny says.

The court did not deny that she was a conscientious parent but the ruling made clear Victoria needed to see both her parents. The daughter Franny fought so hard to protect is living with her father

"I just come in to the house and I sit down and I cry," says Franny.

Victoria is reluctant to talk about any of it now. "I just mind my own business.
I love them both. It doesn't matter whose side I am on," she says.

As for Kevin, he's just happy for every moment he has with his daughter.

"I don't want her to think I'm a Superman or a hero or anything. I just want her to, you know, say 'My dad did what he was supposed to do,' " Kevin tells Smith, crying.

Experts say alienation can happen with both moms and dads. But this concept is still very controversial because charges of parental alienation have been used falsely in the past to defend fathers who really are abusive. And if the courts believe them, the abusive dads can get their children back.

On Friday, Smith will report on what decades of research have taught us about how to have a happier marriage.